Another front-on boring portrait using the WPC process. Using my French Darlot 14" f/4 Petzval lens. The out of focus areas of this lens is really spectacular in portrait, and of course when larger scenes are shot you get the swirly bokeh.

This year Rhys was nominated for an International Emmy Award for work he did on a documentary with Al Jazeera called "Stray Bullets" studying gun control law in the Phillipines. 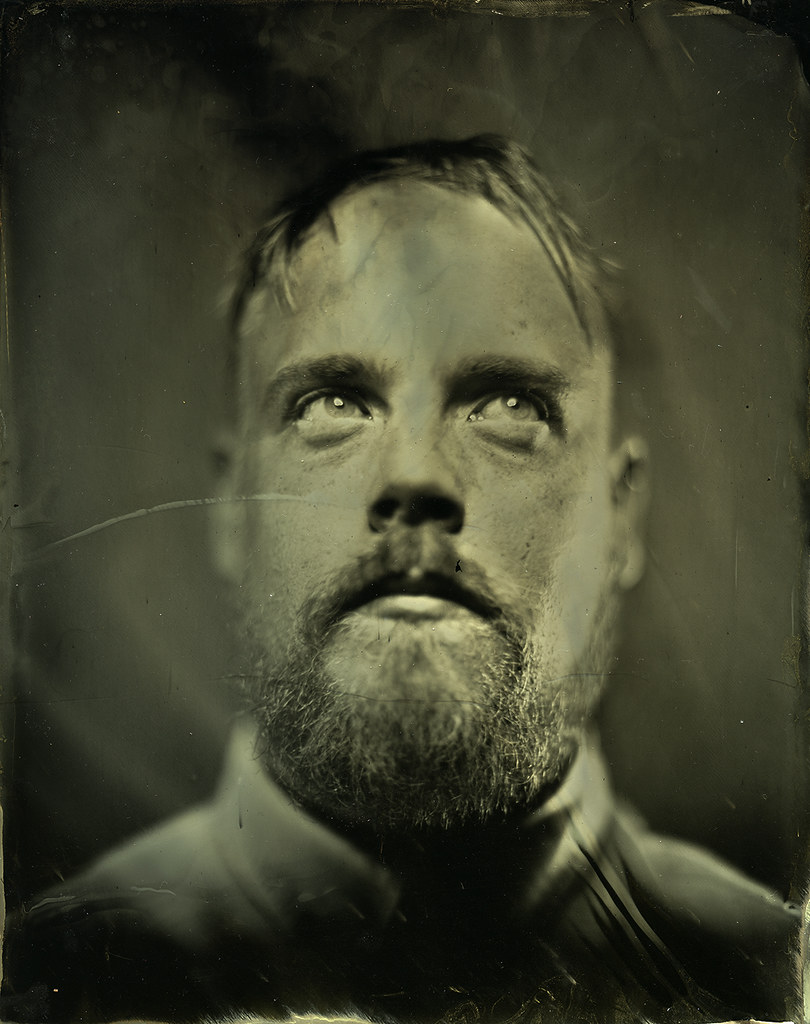 Crikey, that's a strong portrait! You must have had nearly all the camera bellows stretched out to get a full face image with a 14" lens.

When I try this style of portraiture I focus on the eyes and then wrangle the Scheimpflug condition by tilting the back of the camera to bring the middle of the top lip into focus as well. These three points in focus are supposed (er, in theory) to essentially define the face. Whether this is even possible with a 14"f4 Petzval I don't know. I've never had a lens that wild.
Top

Thanks Maris. All valid points regarding the focus. Using this particular lens os quite painful on the 8x10 tachi, a Camera you would be very familiar with. The front standard can barely hold the weight of this enormous lens on it's own, I've got a Manfrotto lens support that sits underneath the lens to add a bit of extra support. This makes movements with the lens incredibly awkward and cumbersome. Either ridiculously strong metal field/studio cameras or traditional tailboard design cameras would be able to make movement more fluid and less strenuous on the camera itself.

I did make up some waterhouse stops for this lens out of cardboard for f/8, f/16, f/22 and f/32 which would have certainly helped in bringing more of the face into focus but this was already a 5 second exposure @ f/4 with development pushed to 30 seconds (double the recommended time for a positive). Any longer exposure and the sitter becomes incredibly uncomfortable under the massive bank of flourescent lights very close to their face (just out of view of the lens).

I've given up on the studio, had several sessions through there and found it's just not for me. Much prefer environmental portraiture with natural light. Much easier and I like being outdoors with this process, coming from someone who usually shoots landscapes

This portrait has a wonderful surreal and haunting presence.
Proves old lenses and alternative processes can yield impressive results!
In the right hands of course!
Top
Post Reply
4 posts • Page 1 of 1