This was a nice day trip from home, although we ended up staying until well after sunset. Photography was not on my mind as we stopped for lunch in the camper and a game of scrabble.

After lunch we strolled along the beach, I became enamoured with this piece of driftwood. Back to the camper to get the camera while the other half guarded the surrounding area to ensure there would be no stray footprints. I exposed three sheets from three angles and distances; this was the last sheet I exposed. The light was exactly what I was hoping for and between the first sheet and the last sheet, approximately 45 minutes had passed. The longer shadow play was about right; I was quite pleased.

Quite difficult to print, this negative scan wasn't easy either. The difficulty lay in the timber not being far enough apart, tone wise, from the wet sand. Raising the contrast ever so slightly resulted in lost highlights of the timber, burning in gave me a flat(ish) print. Eventually I turned to split grade printing and exposure having to be so exact I wondered whether it was going to be worth it. The finished image on the print is approximately 290mm x 380mm, this scan approximates the print; mostly.

I just previewed this before submitting this thread. The thumbnail print inserted in the thread itself, looks as flat as many of my prints before I hit on the winning print. Once I clicked on the thumbnail and viewed the image at its normal size, it sprang into something resembling my print. 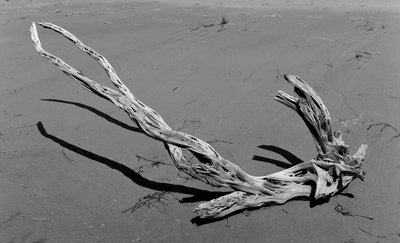