by smbooth
Lets see some Australia darkrooms. Mine is in being built mode, just undercoated the sink today ready for a 2 part epoxy during the week. Have acquired a area of 2m x 4 m as a part of my new home office which I'm going to use as a darkroom.

I am not fortunate enough to have a dark room... I have a cupboard under the stairs that has enough room for me to load and unload film holders, load developing tanks etc. but it has 0 facilities. Just a seat for me to sit down and a bench to put all the required stuff... Its better than using a loading tent I guess. I dont get get super sweaty hands just from loading 4 rolls of 120 film onto reels for developing, or loading 5 double darks...

by Alastair Moore
I'll get some photos my darkroom up when I next re-construct it. It's a bit of a temporary/ad hoc affair in the bathroom! Would love a dedicated room but alas not in my current apartment.

by John Austin
This is an old pic from 2006 - Since then the darkroom has been extended, the DeVere 54 replaced with a DV504, the Focomat Ic replaced with a MG headed Leitz V35 and a new section of dry bench for 42" roll paper cutting and a contact printing frame - The deep tanks of D76d opposite the DV5108E were made up in 1985 and have been replenished ever since, like me, it improves with age - The pic, Hmm, how does that work? - Oh well no pic! - Anyhow it is on my old website sales page, but not on my new one yet, a nice new pic for that when it goes up

by smbooth
All we need is the photo John..

Maybe a new one even.

To Post photo - After you hit the post reply button, down on bottom left below text box is a 'options' and 'upload attached' tab. Select upload attachment, then you can select your file from your computer.

by smbooth
Upgrade, things are slowly coming along. Benchtops are fitted as is 90% of the extraction. Did the sink drainage but messed up the splashback which will now need to be redone before taps go on. I forgot the Durst has a growth on the back preventing it pushing back against the wall so will also need to fit a bit of a bench extension under the base of the enlarger. I rewired the safelight and it getting hung near the power outlet on the ceiling.

BUT .... I'd be painting the sloping ceiling and part of the flat ceiling black to kill fogging. I also invariably have the wall behind the enlarger black also.

by Alastair Moore
My "darkroom" is a slightly more modest affair but it suffices! 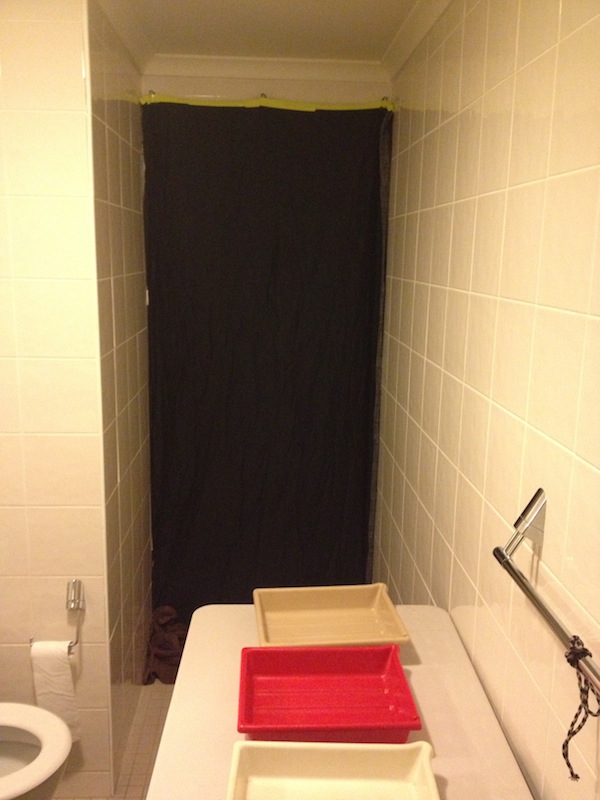 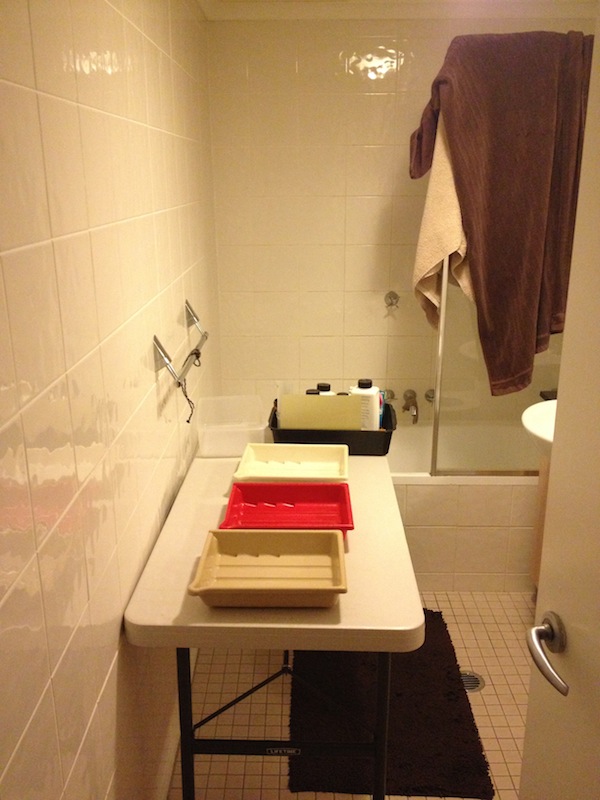 It's big enough to fit my trays and, when I finally get round to buying some paper, 8x10 contact prints on my LPL enlarger. What I'd like is a separate room with temperature controlled water and room for a 4x5 enlarger. Perhaps next year! In the meantime..

by smbooth
At least you can make prints.