Facing directly into the sun just after lunch in September I exposed two sheets, one Ilford FP4+, the other Bergger Pancro 400. The Bergger film had so much of a difference in the shadow detail, I didn't consider doing anything with the Ilford film.

This is in Welford NP Qld.

P.S. :- forgot to mention I have cropped the top slightly as my fingers shadowing the lens, appeared in the image. 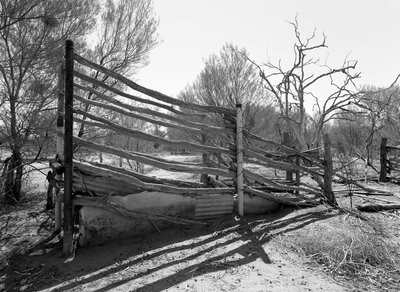 by Maris
Really nailed it. Look at those long diagonal shadows with the same spacing as the rails above them: compositional choreography at its best.

On the face of it the Bergger Pancro 400 is delivering excellent shadow detail because of very generous exposure. A real 400 speed film in the blistering sunlight of Western Queensland asks (in theory) for 1/400sec @ f16 according to the "sunny 16" rule. You've given a 1/30 and allowing for a couple of stops eaten by the centre filter it is still nearly two stops over-exposed. But it works ... perfectly. I wonder if Ilford FP4+ given the same big dose of light would have those beautiful open shadows too.

by Mick Fagan
Ha ha, hands on, never thought of that.

I rate the Bergger at 320 before I start, so a little bit of over exposure from box speed. I am pretty certain I took my base exposure halfway from the lighter coloured vertical pole in the middle of the race and the timber railings. I then let everything else fall wherever it was going to fall. But you are correct, I've been quite generous with exposure and estimate I over exposed by about 1½ stops. I put this down to experience gained from trying to print thin negatives; if you don't have it, you cannot print it.

At this point I'll mention these are from negative scans of a trip we did to the Gulf of Carpentaria, generally going north via mid NSW and Qld and going south via far western Qld and NSW. I have contact printed this 3 month trip and viewed the results, but have been unable to get time in the darkroom to do meaningful prints. Although I do have around 15 prints from that trip.

From my limited experience of scanning negatives, what one can do with them once scanned, is quite incredible. I am on a steep learning curve, I have scanned about 40 4x5" negatives over the last year, including what you are seeing of late. My limited experience and knowledge of scanning film negatives, is telling me the control one has is enormous and the reality is, you can easily do things that are next to impossible in a darkroom; unless you are quite skilled and in the groove.

To directly answer your question regarding FP4+, I gave it 1/8 @ f/16, it didn't hold anywhere near enough shadow detail. Certainly far less than I normally would have expected. I'll get the negative, scan it, then put it up here doing pretty much what I did with this negative, which was a straight scan, slight crop on the left and cropping of the fingers from the top. I then adjusted for contrast and density, then spotted about five maybe six spots, tops. This was an extremely easy negative to deal with and one which I will do in the darkroom.

I have to admit I was a bit dumbfounded when I saw the difference between the FP4+ and Pancro 400. I have used FP4+ very extensively and know it reasonably well, I can only assume there was flare which possibly happened by me using my standard bellows, which were obviously scrunched up, instead of pulling my bag bellows out. This was the only time I didn't use bag bellows on the trip when using the 65mm lens. Actually I think only the second time I have used standard bellows with the 65mm lens, all other times I have used bag bellows.

By the way, if you know the park, this is Sixteen Mile Bore. We decided to lunch there as when we arrived, the light was just past the high point, I needed some light differential to get some decent looking shadows, so lunch in the camper, followed by a leisurely shoot.

The FP4+ negative is more conventional, it has the DDS shading the lens in the image.

by Walter Glover
Back in my days of cameras with interchangeable bellows I only ever used bag bellows for all lenses up to 210mm for the purpose of minimising bellows flare. Only time the normal bellows got an outing was with close work where bellows extension became an issue.

I am yet to get a lot of experience with what what the tiny little 'Sweet FA' I bought last year will do with regard to bellows flare. The size of the bellows and its proximity to the edge of the film area is one of the primary deterrents to the LInhof Technikas .
All times are UTC+10:00
Page 1 of 1
Powered by phpBB® Forum Software © phpBB Limited
https://www.phpbb.com/