It was actually the other way around .... and years apart. I had a beautiful late model Sinar F2 which was a dream to use but a nightmare to carry to a location. I head that Tim Bauer was after one and I had set me heart on a Toyo 810M so I bought the Toyo in the belief that Tim would buy the Sinar. It never happened. I ended up selling the Sinar with its bits and pieces at Camera Exchange in Melbourne. An opera singer named Steve bought it.

In turn I moved and had to forego the print room so I then sold the Toyo to Murray Fredericks. It is a bit gut-wrenching to see him with it on his telly docos. He is happy for me to have it on a sort of permanent loan basis and I am tossing over whether or not to take him up on the offer.

This later 10x8 Sinar was a bit of a dog really. It was an F-series conversion kit which I put onto the 4x5 F2 I have. But you really do need the bigger bearers of the F2 specifically made for 10x8. They are kind of pneumatic which is nice.

I labour a lot over whether to 10x8 or not to 10x8. At the moment, a couple of days after a studio shoot of extracts from a nude figure I can really appreciate the manoeuvrability of the smaller rig. What happens with facility with a 240mm extended to get close is an obstacle with a 450mm extended on 10x8 ..... and with a live subject, such messing about can impede fluency and momentum.
Walter Glover

There is a specialised Sinar store on eBay Walter http://stores.ebay.co.uk/Photon-Photography It is based in the UK and there may be some parts for sale that you could use--eg., parts for a Sinar F2 do come up.
http://thoughtfactory.com.au
Top

My old 8 x 10 Cambo SC monorail on location along the coast near Victor Harbor with a Linhof Heavy Duty tripod. 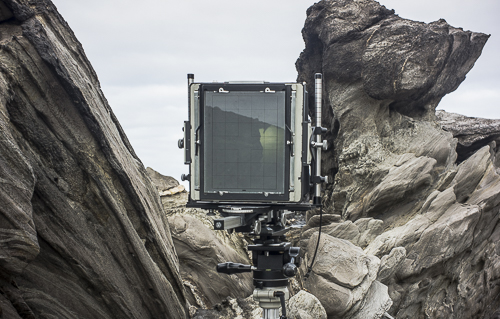 What head is that you're using? I had a Cambo 8x10 monorail and none of the tripod heads I had would ever keep it stable. And it was such a beast of a camera, I could hardly move it out of my apartment at the time.
Large Format Photography Australia | My flickr
Top

The Cambo monorail is very heavy and it is difficult to carry. So is the Linhof tripod --- a heavy duty pro tripod with a geared centre column (http://www.linhof.com/tripods.html) and a Profi 3 Universal pan/tilt heavy. (http://www.linhof.com/levelling_heads.html) The latter is solid and it can take the weight of the camera.
http://thoughtfactory.com.au
Top
Post Reply
36 posts