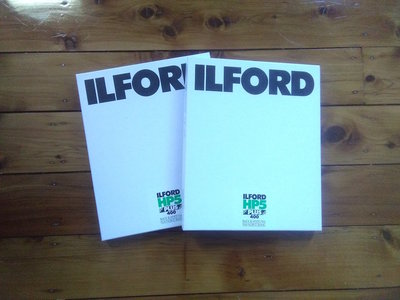 Since around 2009 when I got my first large format camera, I've been shooting more or less exclusively TMax 100 and 400. With Kodak seemingly in its demise, I've been meaning to settle on a new film for a while. I made the transition over last year when I started shooting Ilford on my Mamiya C330 and still having had a few sheets of TMax 400 for both 4x5 and 8x10, I had to use those up. Finally, they're gone. Today I took receipt of two boxes of 8x10 HP5+ - I think 50 sheets will see me well for the foreseeable future. I'll continue to develop the film with Ultrafin until I need otherwise or if anyone can recommend otherwise but I'm very excited at getting to shoot a new film which is going to be my stock film from now on! I'm going up to the Blue Mountains this weekend and so thought I'd take my camera with me and get straight into it!
Large Format Photography Australia | My flickr
Top

Either HP5+ or FP4+ and Ultrafin is my standard in all formats. Good choice!
Top

For mine there is nothing better for contact printed 8x10 than HP5+.
Walter Glover

Well my cold that worsened overnight meant I didn't get up to the blue mountains but did give me the opportunity to sort out some old film stock and hand it off to anyone who cares to try it out. Also decided my very yellow Ultrafin was past its prime and so in the bin that went. I'll be ordering a new bottle next week.

Have a few small projects in mind and wanting to start afresh with new film, fresh developer and the excitement of getting started again. It's been a while since I got out with my camera - haven't been feeling too motivated for some reason. Anyway, I feel like I've got my mojo back!
Large Format Photography Australia | My flickr
Top

Give me a shout if you fancy heading out for a shoot sometime! Interesting enough, that street we had our little altercation is literally the next street down from where I'm living. That house has been somewhat renovated from last time.
Large Format Photography Australia | My flickr
Top

And I have relocated and live not far from there myself. I am in Canterbury now and working in Dulwich Hill so Marrickville and Earlwood are roughly next door.

I am more than happy to arrange a jaunt.
Walter Glover

"Photography was not a bastard left by science on the doorstep of art, but a legitimate child of the Western pictorial tradition." —Robert Galassi
Top
Post Reply
7 posts • Page 1 of 1