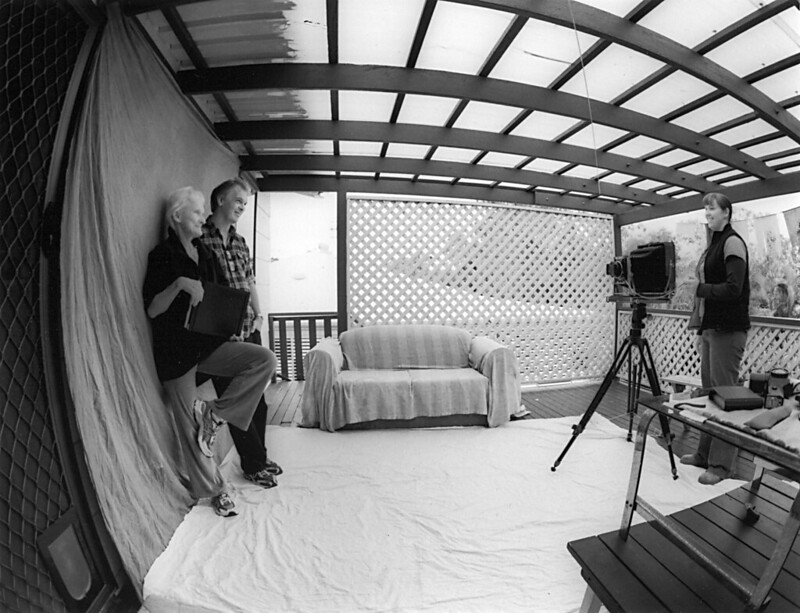 It's not large format but rather of large format. Everybody photographs everyone else, dashes downstairs to the darkroom to process the negatives, and finishes with snacks and bottles of wine. A pleasant way to waste an afternoon but still have something to show for it.

by Mick Fagan
That sounds like a very nice way to spend some time.

Interesting gap between the background and subjects.

Also, cannot say I have ever photographed someone holding an 8x10" DDS holder.

Hmm, could be something to organise down here when the warmer weather gets this far south.

Food for thought for me.

by Maris
Ah, Mick you noticed an old trick: "Interesting gap between the background and subjects."

The camera has been pre-focussed so that anyone leaning against the wall and the grey backdrop will come out sharp; no need to get back under the focussing cloth. The lens already has the correct shutter speed and aperture set and the film holder has its dark-slide pulled. The willing victim, er subject, walks in, stands on a small mark on the floor, leans back, and I immediately press the cable release ... click. It's the fastest shot in portrait photography; but only for one shot.

Maris wrote:Everybody photographs everyone else, dashes downstairs to the darkroom to process the negatives, and finishes with snacks and bottles of wine.

Sounds like a great plan, I think I need to organise something similar when I next have visitors here.

by Mick Fagan
Yep, figured that one out immediately. Been there done that.

Have had thin (not wide) boards coming up from the rear of a chair where the subjects rested their heads, then fire away.

Did this with school photography with 35mm and doing each child one after the other using a bulk film back on my F3 body. Best thing about that kind of photography was that we processed the film in a converted 310mm wide paper processor. Just feed the film in one end and eventually it appears at the other end. B&W film that is.