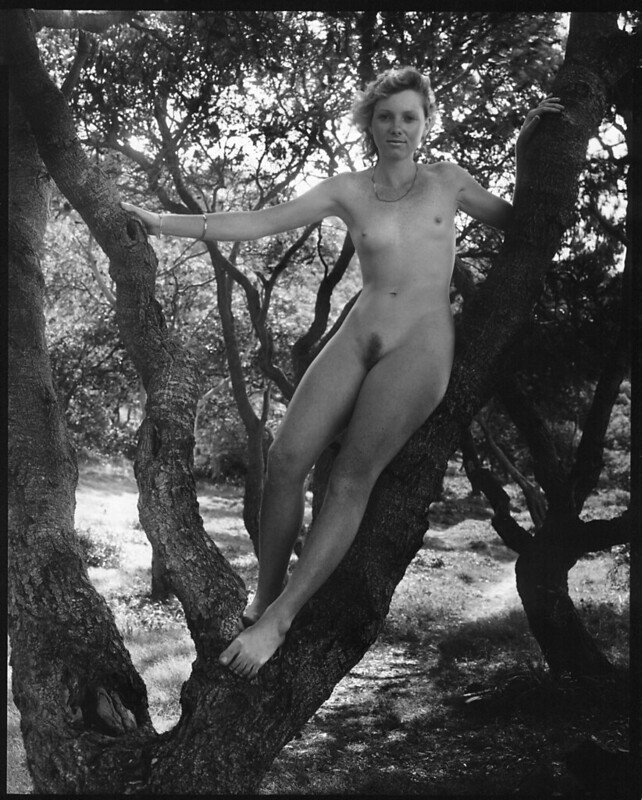 Nude in Tree
Gelatin-silver photograph on Agfa Classic MCC III VC FB photographic paper, image size 24.6cm X 19.5cm, from a 8x10 Kodak Tri-X negative exposed in a Nagaoka double extension field view camera fitted with a Commercial Congo 360mm f6.8
What is it about trees that makes models want to climb them? Maybe it's just an extension of the "look at me" thrill (?) of being photographed by a big camera.
Top

Perhaps they are kind and getting into a more facile position for facilitating waist-level shooting on cameras that often don't have waist-level finders. Having said that, with my mewly acquired Sinar I do have a reflex finder that will be handy for a bloke with dodgy legs don't don't crouch all that well any more.
Curiously, the thpought brought back memories from the 60s of the TLR aparatus for the Linhof Technika (I wonder if the ever actually sold one!) and the infamous GowlandFlex. As teenager I actually met Peter Gowland and his wife when they appeared on a TV show I was working on. To a yoing fella with his heart set on 'figure' photography Gowland was a good source of tutorial publishing back in the day. Along with Andre de Diennes, of course, who 'discovered' Norma Jean.
Walter Glover

Walter, reminiscing about the Linhof Mirror Reflex TLR Attachment hints at your seniority. I bet no one in Australia bought one. I've only seen a picture of it on Google. I did use the Linhof Rapid Change Sliding Adapter for people photography ages ago. It had a little ground glass on one end and a roll film back on the other end. Focus and compose on the GG and then quickly slide the RF back across .... click! Of course sliding the back across told the portrait sitter exactly when to flinch.
Gowland and de Dienes were good but my hero at the time for pictures of pretty girls was Sam Haskins. Much later Sam retired and lived out his days in Bowral, NSW.
Top

The best way I've found to photograph people is when they are relaxed, this model looks very relaxed up that tree. I think you are right about models and trees Maris, but I would also include rocks. If you go into a landscape with some boulders, say granite tors, then almost invariably the model will scarper up and over the rocks. If the lighting is right, as it is in this case, it invariably works.