This was a very quick portrait session, I had around 10 minutes from getting the request, to executing the picture; including finding somewhere to photograph. It was an excruciatingly hot and windy day, the only safe haven was the garage. This area was looked at, a chair brought in, the overhead LED lights switched on, as well as a fan, which didn't seem to help in keeping us cool.

I've never shot under this kind lighting before, so I was really guessing and hoping. In the end I chose Bergger film as I know from experience that this really does have two speeds of emulsion coating. Plus, I didn't have any loaded HP5+ to hand

24mm drop of the front standard. I should have used slightly more drop as her hand could then have been more in the frame, instead of being right on the edge as it now is. Thankfully this lens has huge coverage, by dropping the front standard and keeping the centre of the film axis ever so slightly above her eyes, I was able to eliminate light reflections in her spectacles.

Bellows were pulled out a bit over standard for this lens length requiring ¼ stop correction due to closeness of the subject, so I needed extra exposure. I added ½ a stop via aperture instead of time to alleviate possible reciprocity issues and the possible dodgy lighting. < 1 s, no reciprocity correction is required, from 1 s on, correction is required. This was something I didn't have time to work out, plus my brain was being fried by the heat emanating from the steel roof. I am happy to report that the negative is extremely good, so I now know this film works very well under cool white LED lighting, which from memory, is 6000K.

This film continues to surprise me with what it is capable of doing, I really think not having HP5+ loaded, turned out to be a good thing. 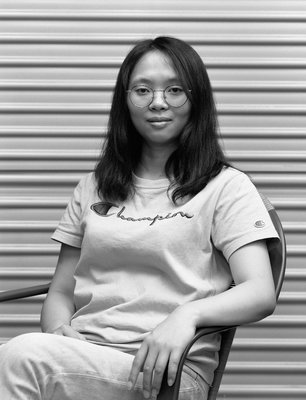 Good portrait Mick under challenging circumstances. And thanks for all the technical detail that reinforces the inescapable principle that if you know what your doing you will get a more assured result. More assured, that is, than taking a lot of shots and picking the least worst one.
That roller door pattern in the background is fair compromise. It's not something you can abolish by selective focus.

Ages ago I used a roller door in the up position to pose someone on a driveway in front of an unlit garage: makes for a big, cheap black background when the light is right.
Top

Bazz, it is a quite clean picture, which did surprise me. The chair was only around 200mm from the garage door and the positioning of it was designed to hide the central locking device. If you look directly behind her neck, roughly where her clothing starts, you can see the flat steel bar left and right. Took a couple of movements of the seat and her, to get it right.

Maris, as for being reasonably good at things photographic, I'm constantly learning from my mistakes; which still occur with monotonous regularity.

I included the details of how things were and how they went, which hopefully helps others to get ideas and maybe adapt what I did to a particular situation they find themselves in. As for the garage door, yep, had no room to move back and get it out of focus, plus, if I had wasted more time, regular lines of perspiration would have become obvious on my suffering subject. She did take great interest in my light meter (Gossen Profi-Six) and as I was wrapping things up, she asked for details on how it works and just what it does do.

We had a quick snack immediately after the sitting, where I explained in the simplest English I could manage, and her English is quite good and way ahead of my Chinese, but her knowledge of many technical words is not the greatest. Surprisingly, she grasped how it worked and how I used that information to get the image. I shouldn't have been too surprised, calculus, applied mathematics and (I think) pure mathematics are things she does for fun. Her academic results are, to put it mildly, quite good. Immediately after that she departed for a flight, she is now enjoying some quite cold weather in her home country.

Of the two sheets I exposed, this was the first one and my preference as it is her preference of the two. I'm happy, the subject is happy, one doesn't need anything more than that.

That's a really nice image, Mick, and I note your favourable comments about the film. Can I ask you how it compares with the various Kodak and Ilford films? Is there a particular quality you like above the others?

I'm thinking of ordering some Foma from Blanco, mainly on price. I've heard both positive and negative things about Foma films, namely that they're good, the 100 and 200 moreso than the 400, but their quality control is poor with emulsion defects to deal with later. Bergger is more expensive, but if it has advantages over other films it's a no-brainer. As with all things you get what you pay for and with film it's better to go for the best you can afford rather than being sorry later. Regards.
Top

Barry, where do I start and how do you explain the unexplaineable?

In general I used FP4, then when it came out FP4+ as my regular film in 35mm land with HP5+ as my fast film. Once I discovered Fuji Neopan 400 I pretty much stopped using anything else and just used Neopan 400. Unbelievable film. I still have around 150 x 36 exposure rolls in bulk Neopan 400 in the refrigerator. With my usage of 35mm film these days, that stock may see me out.

Sheet film is completely different and it's not just the film, it is the tonality of the negatives combined with the far bigger negative area. My go to sheet film is Ilford FP4+ and I know it quite well. I am not a prolific photographer as I have quite a varied interest in a plethora of other activities, but somehow, I have managed to go through 4 x 100 sheet boxes of FP4+ in the last 5 years; just counted the empty boxes in the darkroom.

Bergger Pancro 400 is something else again. It is unlike any other film I currently am able to purchase. The closest film is Fuji Neopan 400, but even then with Neopan 400 in my hands, it is unable to hold shadow and highlight detail as well as Bergger Pancro 400.

If you look at these samples at the largest size on your screen, not the click and view size, which were taken with Bergger Pancro 400, you may glean why I really like this film. Shadow detail, highlight detail and resolution are reasonably good. Plus there a something factor with regard to the overall contrast that you get when you develop this film properly. Properly is 17 minutes or whatever it is they suggest, it really does like full development which I assume means the two different emulsion speeds are properly developed.

To get the same kind of contrast look in FP4+ I need to over develop (so to speak) on a flat day and expose as though it was a 200 or 250 or 320 film. For bright conditions I usually pull FP4+, essentially doing the reverse. With Bergger Pancro 400 film I work out my film exposure, usually finding a middle ground between shadow and highlight at 320 ASA which is what I rate this film at. Then fire away. No developing change from the stipulated 17 minutes from the manufacturer in D76 1:1.

Once I worked out that regime, I have not really had technical failures with this film.

Mick, thanks for your very detailed and informative reply. Yes those sample images are great! No other words needed. Very hard to get that detail, snap and glow, right through the tonal range. Very impressive. On your recommendation and the comments of others I've read there's no excuse for not trying some for myself. I believe it also responds well to PMK, which is my all-time favourite developer. Thanks again.
Top

Barry, I just looked at your location, I'm not sure if they are open, but Gold Street Studios are sort of just up the road, maybe 35 minutes from your place tops.

Their website is showing stock. I have the 50 sheet boxes, which are possibly works of art themselves; their presentation is superb.

Hi Mick, thanks for the thought. I already get my stuff from Ellie, especially now she is carrying more stock. I usually wait until she has an exhibition I want to see and pick up some supplies at the same time. She's a lovely person and has a good little gallery. Worth a visit if you haven't been there.
Top

Yes I do shop there and the last exhibition I saw there was some carbon printing from two or three people. One from the USA, one from Hawaii (I think) and a maybe a third person, but I cannot remember.

She has a very nice darkroom, obviously set up or teaching.