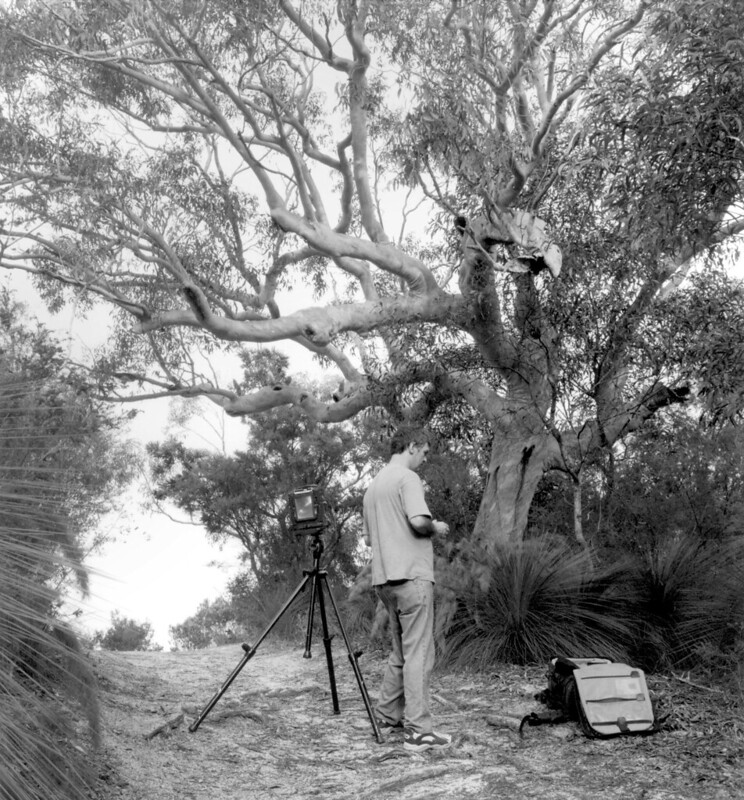 It's one of those high bright overcast days when the bush shows its true tones and patterns instead of being overlaid with a lattice of shadows and sun patches. My friend Andy Cross has seemingly stared at this spot for nearly two minutes which is long enough for me to set up and photograph him. Perhaps it is true that, of all the practitioners of camera arts, it is large format photographers who are most vulnerable to intense seeing.
Top

You are right, very nice range of tones, could almost do with a slight contrast kick; if one was so inclined.

Yes Mick, a "contrast kick" would be in order but, rather than confess a fault, I blame the 1948 vintage 21cm Voigtlander lens: bad single coating and a major separation in the front doublet. It's buttery smooth for portraits but for "trees against the sky" landscapes not so good.

Tripods! Tripods? I've got ten of them stacked up but the one under the Tachihara 4x5 is a Gitzo G1228 Mountaineer. This was the first carbon fibre tripod on the Australian market and I think mine was from the original batch. Cost about $1000 with magnesium ball-head but it had to be possessed; gear acquisition madness.
Top
Post Reply
3 posts • Page 1 of 1