Drawing upon the literary character, Almitra, as expressed in Kahlil Gibran's epic sage in verse, 'T he Prophet'
The light source is otally within the frame. Fifty candles are the 'available light' for this 10x8 negative shot close to wide open with a lens made in 1947. 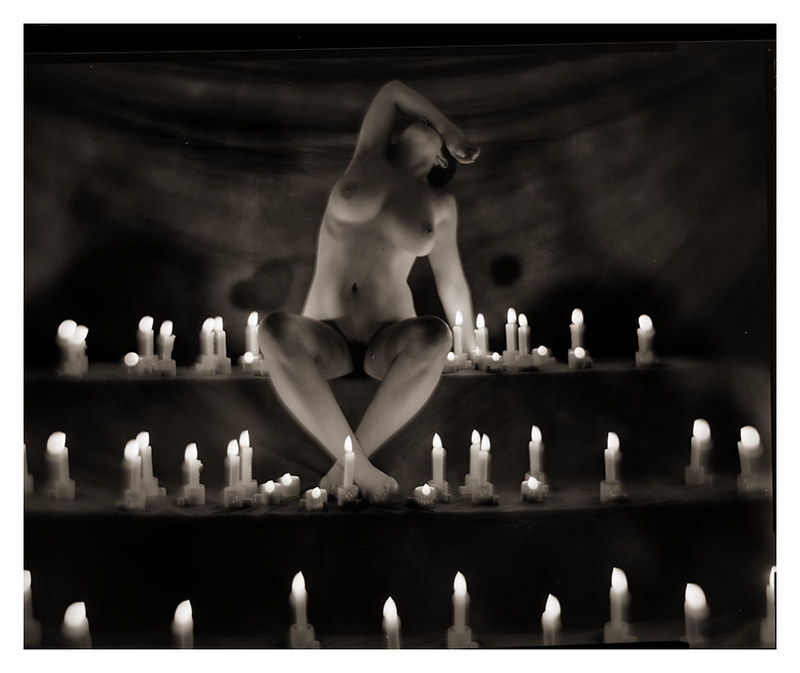 What an extraordinary concept, extraordinary execution. I hate to think what your candle budget must have been. And congrats to Almitra for the elegant and courageous fire stunt.
Top

The candle. budget waas nothing out of the ordinary Maris. The unforeseen budget was the time it took to light all the wretched things.
Then there was the fragrance of all that burrning wax whhich brrought the guy we were renting the place. in tos it reminded him of when he was an altar boy at high school. That suited me. because, as I said, the series of pics was essentially about the unrequited. passion of the character, 'Almitra' for the protagonist, 'Almustafa' in Kahlil Gibran's "The Prophet"

And there came out of the sanctuary a woman whose name was Almitra. And she was a seeress.
And he looked upon her with exceeding tenderness, for it was she who had first sought and believed in him when he had been but a day in their city.
Walter Glover

That really is something, the concept is often hard to make it look right, from what one has in your head that is.

I think you and your model have succeeded and then some.