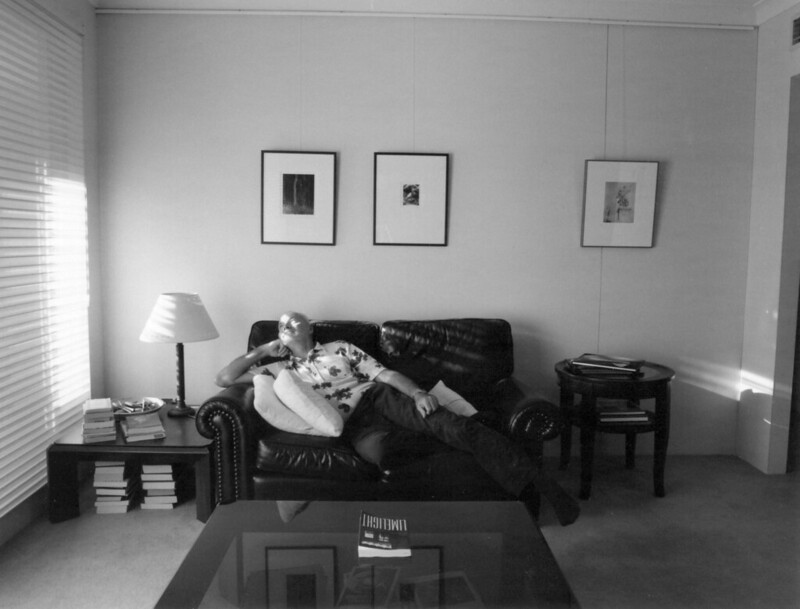 A few platinotypes to look at, plenty of books to read, but mainly idleness prevails.

by Walter Glover
Aaaah, hovering gently around a less orchestrated, more credible Arnold Newman 'environmental portrait'. (Did he ever delve into the selfie? — Task for tomorrow is to get one of the carers to reach down "One Mind's Eye" so I can check.)

Strange departures from the Maris-norm here with T-Max. The second version of TMY spoke to me but these days the costing might be prohibitive. Was this at the Undy's or elsewhere. Only time I met you was at their Reservoir Street edition of Point Light. Maybe this was about that time?

By my understanding, at this distance from you, this 'idleness' is possibly a characteristic Marisesque idleness of continuing engagement and enquiry.

by Maris
Yes, Walter it was at chez Undy in the Excelsior on Elizabeth street.
TMY in the 4x5 format used to come in 100 sheet boxes for less than $1 per sheet if one dodged the 22% sales tax on it. It was a genuine 400 speed film and I bought up big on it, froze it, and used it well past the official expiry date. Now it's gone over-the-top stupid at $6.50 a sheet in ridiculous 10 sheet boxes. My film 'fridge has Fomapan in it now.

by Walter Glover
No matter how many millions Australian governments gave 'Old Yella' to prop them up there was never any stopping them shooting themselves in the foot, Maris.
All times are UTC+10:00
Page 1 of 1
Powered by phpBB® Forum Software © phpBB Limited
https://www.phpbb.com/