Saddened by the destruction of the recent fires I decided to reprint some of the 8x10 negatives I made when living in Cann River during the 80s. This place to me was the centre of the universe, being close to pristine coast, cool temperate rainforests and only a short drive to the Australian Alps. From what I can ascertain very little has remained untouched by the fires. As well as 8x10s I also have 6x6 negs from the 80s and 4x5s from subsequent revisits to the area. I doubt that I will see it in anything like that condition again. The following are contact prints made on Ilford MGFB Warmtone developed in ID-78. Unfortunately the huge scans have suffered greatly in their reduction for web viewing, but that's life. My homage to a once beautiful country. 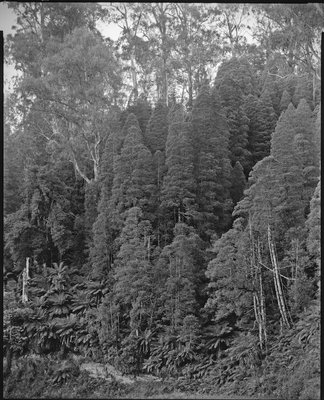 Podocarpus aff. lawrenci, Errinundra Plum Pine. Known from only a few locations in the Errinundra Plateau region, these few small groups of trees are the only remnants from the time when Tasmania was joined to the Australian mainland at the time of the last ice age. (Two views: 480mm Rodenstock Apo-Ronar, FP4 at ASA 64, Rodinal 1+50) 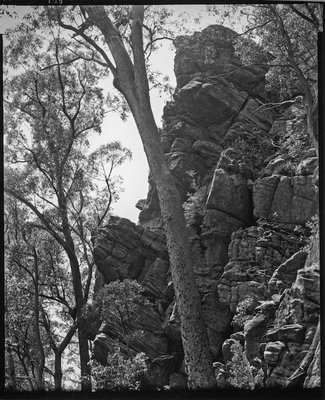 Cliff, The Sisters (also known as Three Sisters). A rocky escarpment formed by uplifting of Devonian sediments, and dramatic in presence. The front standard had to be raised to such an extent that a shadow occurs at the bottom of the neg, from upper bellows. (480mm Rodenstock Apo-Ronar, FP4 at ASA 25, ABC Pyro.) 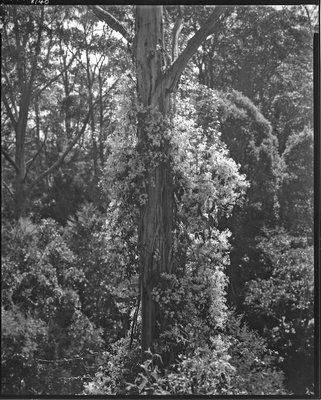 Clematis aristata, Mountain Clematis, can be found climbing into the crowns of tall forest trees. A beautiful sight, as I saw last November when I traveled through the area. I resolved to return with some cameras in Spring 2020, but alas what I saw is sadly no longer there. It'll return, but not in my lifetime. This specimen was climbing well into the crown of a Mountain Ash tree. (Tri-X at ASA160, 480mm Apo-Ronar, HC110 1+15.) 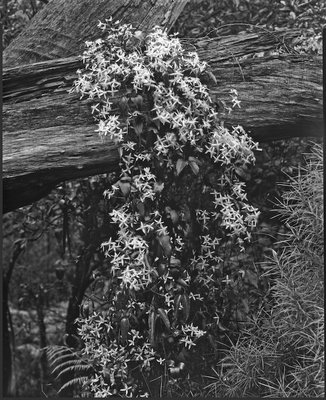 Mountain Clematis on log. These wonderful plants climb and scramble over everything and are a truly beautiful sight. (FP4 at ASA50, 480mm Apo Ronar.) 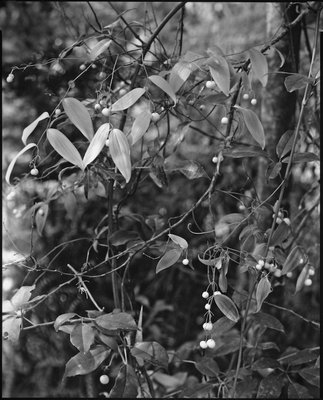 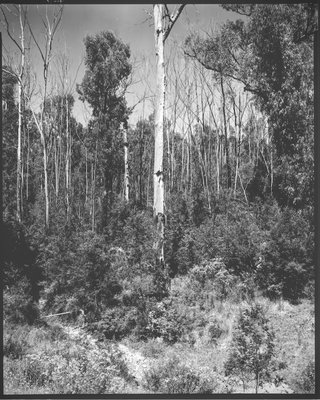 Forest Regrowth. Three years after the 1983 fires in the area, this patch of bush is regenerating nicely. But it takes time. Fire-killed trees remain standing as stark reminders of what has passed. (FP4 at ASA64, 10" Commercial Ektar, D7 Pyro.)
Top

Barry, they are all brilliant, but the Mountain Clematis is more brilliant; if you know what I mean.

Quite a nice collection, there must have been some intense trips over some time to gather the images you have shown us.

Thanks Mick. Yes, I was always out and about with a camera. Living in Cann River I was never very far away from something nice to see. My only regret at the time was the camera. a Toyo 810M monorail. It was beautiful in every respect - precision engineering, capable of large movements, and a real joy to use. But not a field camera! I do enjoy contact printing those 8x10 negs though.
Top

There is an honouring of the natural world inherent in making photographs of it. And in the case of large format work, where a big and expensive piece of film gets "burned" in the process, the honouring becomes a virtual sacrament.
Barry Kirsten, your pictures certainly reward repeated looking, repeated contemplation.
Top

Many thanks for your kind words, Maris.
Top
Post Reply
5 posts • Page 1 of 1

Users browsing this forum: No registered users and 6 guests