by Barry Kirsten
Still going through my past images from the Errinundra region, I found three work prints made on Gallerie Gr 3 for which I have no negatives! For some unexplained region I have misplaced the negatives and haven't a clue where they might be. They're 4x5s from around 2000, most likely on FP4 or Tmax 100 in PMK. The three prints of Clematis vines were scanned at 1200 dpi and enhanced slightly in Darktable (a ripper open source substitute for Lightroom which I wholeheartedly recommend) and reduced in size for web viewing.

The two images of First Creek Falls are actually MF. To get to these falls is a 2 hour push through bush and I've never taken LF gear there. Although I have several good b&w negs of this wonderful falls, the image of the main drop was made on Velvia 50 and converted to monochrome. (Linhof Technika 2x3, Super Angulon 65mm). The last image is of the second drop (there are three drops, but I haven't visited the third), Kowa 6MM, 50mm lens, Pan F @ASA16, D7 Pyro developer. 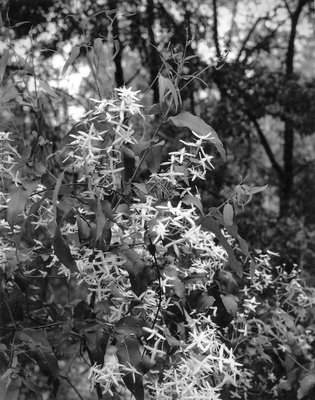 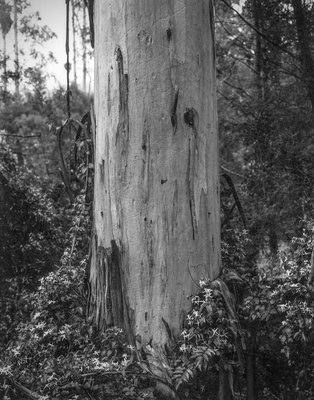 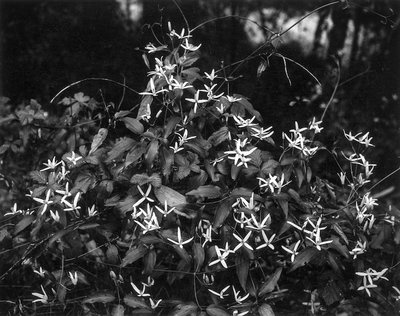 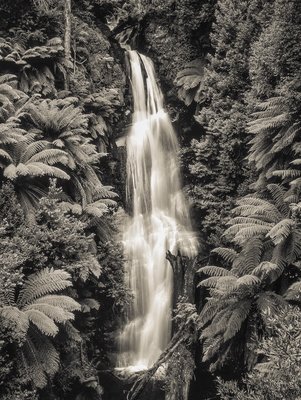 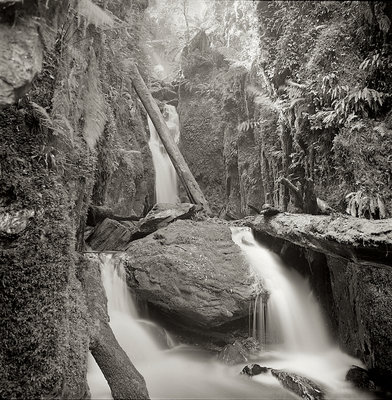 by Maris
At the moment I can't think of a better use for eyesight than looking at these wonderful pictures. And what a surprise, a picture from a Kowa Six camera.This poor man's Hasselblad had wonderful lenses and a reputation (undeserved?) for dodgy mechanicals. I almost bought one last century.

by Barry Kirsten
Thank you Maris for your kind words, I feel very honoured.

Yes, the Kowa is both a brute and a beauty. The mechanicals are said to be temperamental, although I've had no trouble with either of the two I've owned, and they are big and heavy for the format size. But the lenses are indeed wonderful - sharp yet producing a pleasing 'look' in their images. I currently have the Super 66 model which I've decided is not an advantage over the earlier MM model; it has interchangeable magazines, but has lost the mirror lock-up of the earlier model, which is a distinct disadvantage.

by Mick Fagan
These really are nice, the Kowa ones are pretty decent as well.

In 1991 we were in Western Australia on a motorcycle, we dropped in on a person with whom I had been exchanging prints. His eyesight was failing him, but his work with his Kowa was outstanding. I really thought about getting one, but it never happened. Always wondered about that, but I was drifting back into personal sheet film photography and never looked back.

I think I'm going to look for some Clematis in the future, if I get anything as half as good as what you've been displaying, I'll be happy.

by Barry Kirsten
Too kind, Mick, thank you. Clematis is fairly common, usually in damper areas supporting tall forest trees like Mountain Ash. There are patches in the Dandenongs and into Gippsland to the east. A place I suspect it would also be found is in the wetter forests around Lorne. I can't recall seeing it there, but I intend having a look there later in the year. October/November is the best time. The sort of country to look for is almost tree fern habitat. Regards,