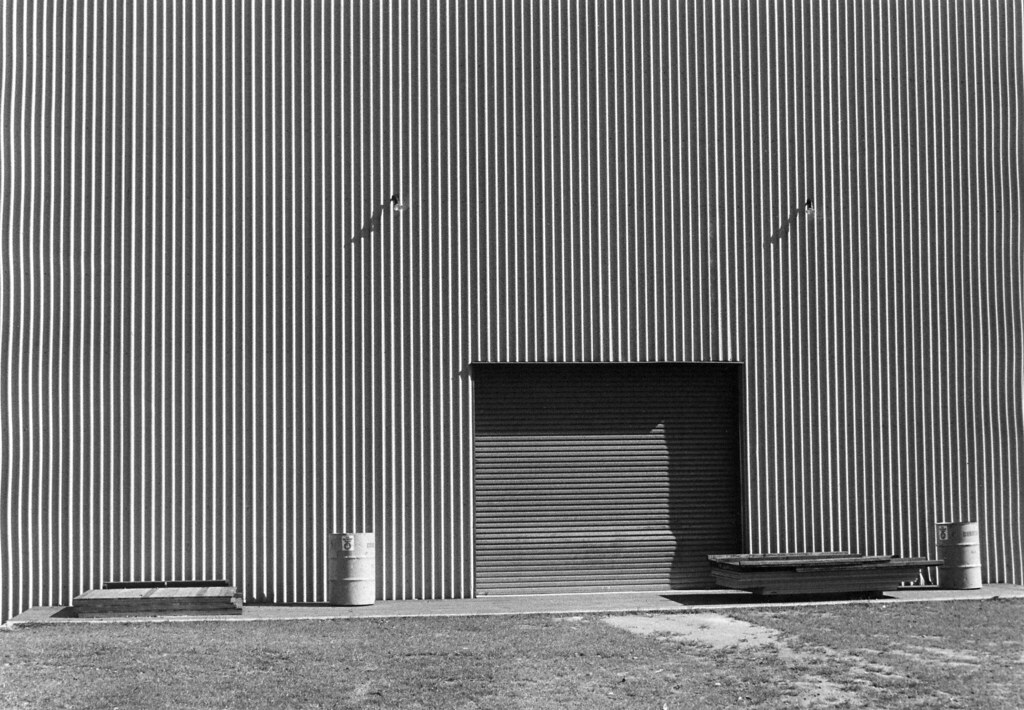 The Tachihara 45GF is a very nice lightweight folding field camera but it doesn't have the precision and rigidity to tackle a demanding architectural subject like this. I should have used my Toyo 45G monorail camera to get those metal corrugations dead vertical. But the Toyo and its big aluminium carry case are heavy and cumbersome and easy to leave in the studio.
Top

Nevertheless the image creates a feeling of excitement with its strong horizontals and verticals and the high contrast light. And the slanting shadows of the lights above the door modified by the corrugations provide interesting geometrical counterpoint. A very worthy subject to photograph, Maris, and beautifully executed. I suppose it's an LF photographer's innate reaction to look at an image's geometry, but I don't think many would criticise this one for a second. I like it.
Top

Music to my eyes, Maris ....... but you probably guessed that already. Brings back warm fuzzy memories of the prophetic (you guessed it) Grant Mudford with a healthy dash of Lewis Baltz.

What really drives this home for me is the counterpoint to the disciplined vertical regimen of the façade of the slumping (as they so often are) horizontal rows of the roller shutter. Then there are the haphazardly stacked piles of flat panels setting of the rigidly stoic bollards.

Not the most appropriate comment for within these hallowed Large Format portals but I purchased and ogled over a monograph of Lewis Baltz thinking it was remarkable 4x5 shooting only to discover it was all 35mm Technical Pan.
Walter Glover

Thanks Barry Kirsten and Walter Glover. Lewis Baltz and his mastery of industrial minimalism was certainly an influence but Grant Mudford came first for me. I used ransack the local newsagent and buy all the photography magazines and in Creative Camera 1977 there was a big spread of Grant's work done with his PC Nikkor lens on 35mm. And he was Australian! And Australia is full of corrugated iron that is absolutely gorgeous when the light kisses it right. My path was set.

Actually when I took this photograph I was thinking of another image by a local photographer. It's called Crescent Cold Stores 72 8 and was posted here in "Things" on 13 Oct 2017. Light meets iron perfectly.
Top

"Actually when I took this photograph I was thinking of another image by a local photographer. It's called Crescent Cold Stores 72 8 and was posted here in "Things" on 13 Oct 2017. Light meets iron perfectly."

Thank you Maris, very kind of you to say so. Even kinder of you to remove the porcelain throne. Although I admit that I have always indulged in pride with that shot that the shadow of the cyclone fence on the raised plastic seat printed beautifully when I used my Durst L1200 which now frolics in the hands of Barry K. The distortions of that shadow give form to the moulding that enhances and finishes the shot.

Mudford was something of a giant at the time as I recall but, having been forced to shoot 35mm with tilt/shift lenses for commercial expedience, I can't for the life of me fathom why anyone would prefer slaving in the dark in preference to schlepping a bigger camera, tripod and lens. "A tilt/shift does not a view camera make!" I'm very impressed by the vertical parallelism on your shot.
Walter Glover

Two lights, two drums, two stacks of material, one door; what a find!

You have enhanced this no end with your timing to get the play of light and shadow done to perfection.