This is the second wheat silo of our trip, in Lascelles. Once again nothing about the art on the silo, but more my wish to photograph the wheat silo, which is still in use.

This was quite striking and fortunately we were there at the right time for good light, shutter tripped at 11:20hrs. If we had been much earlier or later parts of the building would have been in shade. As it was, a big shadow from one of the concrete silos was encroaching from the right quite fast, so I really was in a hurry to get it on film before it was too late. May through to August is a good time of the year for low light down south, as far as I'm concerned.

Unbelievable wind though, whipping through and around the big concrete silos, a steady hand on a tripod leg and a short cable release worked well. I firmly believe a wooden tripod is far superior to almost anything smaller than a tank like tripod made from metallic material. Don't know about carbon fibre, but I'll put my Berlebach up against anything, it really dampens things down. 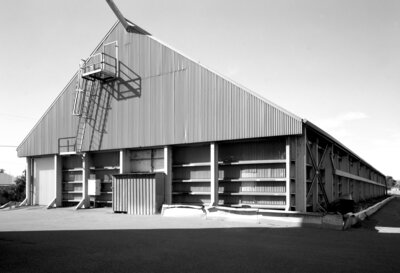 Aaaah Mick
light reveals and shadows give form. And when that revealed form is pure linear Euclidian geometry it tubs at my heart strings, as you might have guessed. But when you add the extra element of that unexplained encroaching foreground abyss providing a solid plinth to the structure it is purely monumental. I take my hat off to you.
The crowning glory that confirms that it is our chosen medium and not the product of Indian ink, nib, paper, and the endurance of tedium is the delicate hint of shading to the top right sky which counters the heaviness of the plinth.
Walter Glover

Thank you Walter, a very descriptive way of saying the shadow is about to envelop the structure. I do like the solid plinth bit and after some thought, it is a perfect description.

The delicate hint of shading to the top right, I wondered about that after you mentioned it, so I had a look at the negative. Yep there is very slight falloff, which is to be expected. The image has been cropped from the bottom and left side, leaving the top right corner to show the falloff. Overall and considering there was a modest front rise, I'm happy with the lens, but..............................

I'm now wondering whether I should do a test with my graduated centre filter, with which I have had great success on my 65mm lens. It may be worth knowing whether or not it works well enough on the 90mm lens.

Lockdown does have advantages, first time I've had spare time since retirement 9 years ago.