by Mick Fagan
This was almost a disaster before I started. I was walking quite carefully towards this boat carrying everything I needed, camera mounted on the tripod, lens attached, loaded film holder in a trouser pocket, light meter swinging from my neck, as well as my loupe. Then I slipped in the viscous mud, probably destroying several mud crab houses just under the surface.

Fortunately I managed to save it, but I did get copious amounts of mud on various parts of the body and clothing, but nothing on the important bits. It was a cloudy day and this was the fourth time I had dropped in to photograph this boat, I figured with a bump in developing, an orange filter and under exposing the negative slightly, I might have a chance of getting some decent contrast.

Negative is a bit thinner than I would like, fortunately, everything I was after is there. The orange filter was used to lighten the hire boats which are either side, they were bright orange. I figured they would go dark without a filter and I wanted everything to be bright as I was struggling with the light from the get go. 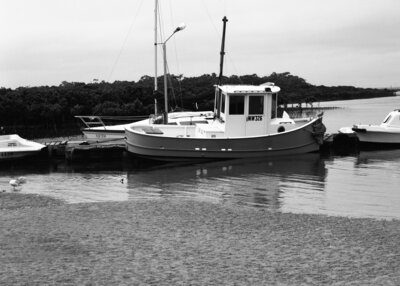 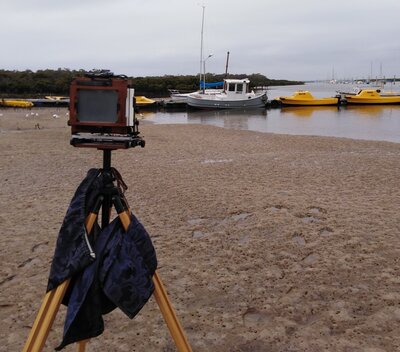 by Walter Glover
Well worth the effort Mick,

And possibly a chance to time the final rinse by running the clothes through the Persil?

I have a question without notice, if I may? How do you get to be able your gems to such a useful size on the forum? I have always followed the guide and upload my jpegs at 800 pixels and they are tiny by comparison. Is it too do with the CODe or the saved size?

by Mick Fagan
Oooooooh, maybe I need to find out the "Guide", to see what the restrictions are?

I have tried to find what the image sharing guide is on this forum, but nowhere was I able to find it, can you point me to where it is?

To answer your specific question, depicted image size in a forum is in some instances guided by the shape of the image. If it is a portrait shape, then it won't look too flash as height restrictions be they forum or your computer screen usually are the deciding factor. With landscape, then you are almost always going to get a better looking, or bigger sized image on any computer screen, as the image window in the forum and your computer screen is often 2:1, or very close to that. My own computer screen is 297mm high by 540mm wide, I just measured it. 1.82:1 is the ratio, so anything nice and long on the horizontal is often going to get maximum size.

Over the years I have noted the allowable image sharing size has increased on almost every forum I am on; too many actually, but then my interests are too many. Around 3-4 years ago many forums upped the allowable image size, most of them allowed up to 2048 x 1529, I have no idea how they arrived at that sizing, but that is what they were set at. I know that image size can use up enormous capacity that is paid for by the owner of the forum, one way or another.

Last year I made a couple of contributions to another forum and inadvertently set the limit to 2100 on the long side, I have, it seems after some internal investigation, been doing this size since then.

by Oscar
(Just a sec while I take off my LF photo admirer hat and put on my LFPA forum admin hat...)

For what it's worth, this site is currently using about a third of its storage capacity. The storage limit is higher than what it was when I took over a few years ago, but I have never even looked at attachment size limits until now

Looking at the site settings, there is no deliberate limit on image dimensions, just a limit on attachment size which is 10MB. There is a 400 pixel limit on thumbnails but that shouldn't be an issue.

Feel free to message me with any questions/suggestions about this, rather than causing any more disruption to Mick's thread than I already have

by Mick Fagan
Oscar, thanks for the clarification, I won't be changing my storage size, unless you suggest I should.

My preference is to have images large enough to be viewed with ease, but not over the top large enough and just needlessly taking up costly storage space.

I've looked at most of my images I have posted here over the years. All of which are from 4x5" B&W negative scans. If they have been cropped slightly, then almost certainly the storage size is under 2MB, mostly between 1.5MB to 1.9MB. If I haven't cropped, then dependent upon the structure of the image itself, the size is usually slightly over 2MB, mostly between 2.1MB to 2.5MB.

All of my B&W negative scans are done on my Epson V800 and arrive in my programme on or around 150MB. After cropping, cleaning up dust and scratch marks, adjusting contrast (H & D Curves), followed by a slight sharpening, I then scale the image to 2100 pixels on the longest side. I then end up with what you see.

Feel free to keep the size discussion on this thread, I don't mind.

by Mick Fagan
Walter, I nearly choked on my breakfast when I read your reference to Persil. I'm married to a German and on my first visit to meet the then girlfriend and possible future in-laws, I needed some laundry done. Down to the cellar I went with my girlfriends mother to be greeted with a 50 year old washing machine, which while it worked it was seriously ill.

Persil saved the day, my mother in-law who doesn't speak a word of English and I didn't really speak German, mimed what to do pulling a bucket of soap powder in a cupboard. The method she used was a long soak in the powder/water, then into the washing machine with a small amount of powder then two hours later the whole house reverberated to the sound of the spin cycle. They were so clean I couldn't believe it, I was then shown the secret, Persil. Which is a German invention.

To answer your question, I often wear those trousers that one can take the bottom off and turn them into shorts. This I did as they were seriously muddy. Fortunately I was in the truck, which has a camper bolted onto the tray, plus we have a 140 litre spare tank of water under the tray. I rinsed them outside under the truck, then I went inside and got some water, some washing powder, then placed it into my around the world travelling washing machine; worked a treat. I hung the washing on a line inside the box under the bed of the camper.

The Scrubba washing machine really does work, I've used it in various parts of Australia, especially where water is really scarce, Iceland where we spent 2 months, saved a motsa on potential washing costs. The only time I used it in Germany was with my brother in-law at the bottom of his garden in June where a stream passes. I used the water from the stream to wash the same trousers I was wearing for the above picture. He was very impressed, but also amused at the effort I went to to have clean clothes as we travelled.

The mud on my shoes though, is another story.

"Our cloth all Persil snowy,
For Austral picnic spread,
Where hums the humble blowie
And beetroot stains the bread."

Handy clue about the Scubba but if fell into the mud on a shoot these days it'd need to clean my clobber Plus half a ton of motorised wheelchair.

When I was a rug rat people still often used washboards with a cake of Sunlight, or Velvet, but for those with a washing machine the choice was Persil, or Rinso.

by Maris
Persil? Rinso? Ah, Walter and Mick, you city guys had it easy. I remember the days of shaving yellow laundry soap into a copper of boiling water sitting on top of a wood fire in the back yard. Everything got boiled, stirred, rinsed (blue), wrung, and then pegged onto long lines held up in the sunlight with forked poles.

by Walter Glover
Maris,
Rest assured it was not all Persill and Rinso and a washing machine. In the laundry from the block of flats where I grew up had the ubiquuitous copper which was connected to the gas meter. And the gas meter, in turrn, was the mother of invention for local kids scheming ways of getting into the pennies to go to the shop.

One of the things I'd really love to photograph these days these days is a copper stick. The solid wooden rod used to stir the clothes which would break apart into shred off bloated fibre.n fibre. Not that I'm recreationally a still-life kinda guy.

by Walter Glover
OFF TOPIC

Thanks for your responses about concerning image size. It had been a while since I'd been able to post between my stroke and getting into my care facility with access to negs and my scanner and had to relearn procedures. The size culprit would appear to be the online 'library' from which I generate the BBCode.

This is the only forum I post to and so I'll leave things as I've been doing. 800 pixels is enough for a guy who likes contact prints and reveres the intimacy of a print held at arm's length.