by Walter Glover
View straight down from a balcony for a landscape architect using a Linhof Master Technika with a Rodenstock 35mm f/4.5 Apo-Grandagon. 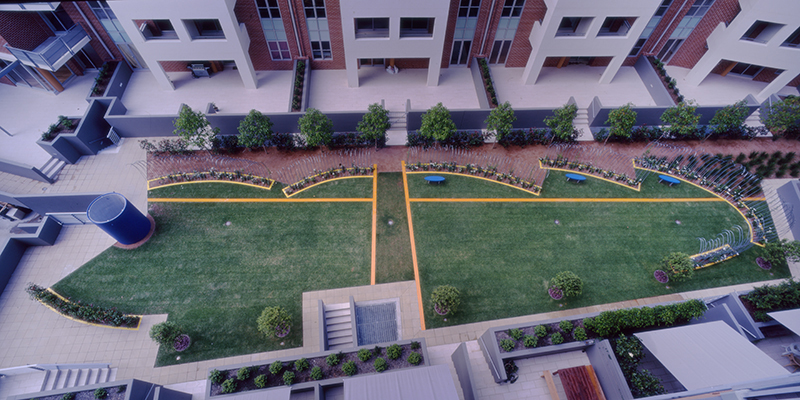 by Mick Fagan
That is pretty impressive, takes a bit to get one's head around the viewpoint, but once there, nice.

by Walter Glover
Thanks Mark,

The viewpoint was requested and the 35mm lens was the only one available that could achieve it. Keeping in mind that a plan view is business as usual for designers and architects.

It is shot with the 6x12 back to isolate the relevant content. Viewing the full 4x5 screen meant that the landscaping was lost by super exaggerated dominant white panels of the structures. Added to that it could be said that the lens coverage was found wanting.

by Mick Fagan
Walter, still pretty impressive being from a roll film back, certainly not easy.

My actual trade was gardener but in practice being a landscape gardener, in the true sense of the word. Therefore I invariably worked from landscape architecture plans almost every day. Sixties to mid seventies mainly. Mostly one only used a plan view, although whenever there was a slope of anything roughly steeper than 3º, a side elevation was always included.

In 1984/85 Christmas we were in Germany and I had the pleasure of finding out that one of my wife's niece's was a landscape architect based in Berlin. I wondered about the amount of work available in Berlin, not too much but enough to survive. She was extremely passionate about her work and had plenty of zest and zeal.

Fast forward to after the Berlin wall came down and another trip to Germany I found that she was inundated with work for the rebuilding of many places in and around Berlin. One subject came up, which was photographic recording of her work. Or more correctly, the obstacles in the photographing of her work due to the closeness of other buildings among other things.

One solution was to utilise a klein Zeppelin (small Zeppelin) which was held in location by wire cables by people atop rooftops, combined with a very long cable release it seems it was remarkably good going from the pictures I was shown. We discussed various aspects of shooting from Zeppelins and her grandfather, my father in-law, who was a photographer on the Russian front in WWII, also used Zeppelins for aerial photography, joined in the discussion. In WWII her grandfather used AGFA 200mm wide roll film, colour and B&W negative films. The Berlin based company used AGFA 220 colour negative film in a specially made miniature version of what her grandfather used in Russia.

These days everyone uses a drone with a small digital camera and views the imagery in real time on their mobile phones including when to take a still, quite incredible progress.

by Maris
Wow, what a dizzying perspective. And to add to the vertigo I think that the picture as seen on my monitor is upside down. Walter, did you do this with cunning intent?

It was a totally unintentional inversion, I assure you. Also laterally reversed. It was so long ago and memory failed me. And bloody E-6 emulsion side is not all that matte.

Corrected now. The vent stack from the underground car park was the primary give away when I delved into it. Then the descending stairwell. Sorry.

Fast forward to after the Berlin wall came down and another trip to Germany I found that she was inundated with work for the rebuilding of many places in and around Berlin.

I have an ex-pat Pommy mate living in Berlin for years (former assistant to Bailey donkey's years ago and married to the daughter - or granddaughter of Patton) and found an enormous workflow boost when the Wall came down. He put me onto a monograph that was the catalogue to an exhibition of photos, 'Now & Then' of the changes between East & West which were often major revisions even of town planning. Talk about a gig I'd have loved to have had a crack at!

The landscape architect who commissioned me was actually my next door neighbour, Vlad Sitta, who also did the Australian Museum site on the old hospital grounds in Canberra and the Australian precinct at the Beijing Olympics, Through him I met quite a few 'gardeners' who all have in common a connection with Life, the Universe and Everything that would make even Douglas Adams feel faint. When I was working a lot with ACP the favoured watering hole was The KIng's Head ('The Toilet') which was also the haunt of the gardeners from Hyde Park who were another side of the equation .... they knew and tended all the illicit crops in the mid-city park.

As you'll see from the response to Maris's post I had inadvertently uploaded the scan upside down and back to front so the perspective is not quite as puzzling.

Vlad also did this design for a low maintenaance yard in posh Woollahra for mosquito-free alfresco dining courtest of stone shards and bronze troughs of citronella.