When focusing my monorail, I normally just improvise for a focus cloth, usually using an old sheet or similar. Do people think there is much benefit in a "proper" focus cloth, like the various ones that can be found on eBay? They seem like a lot of money for something which ultimately is just some cloth, but I'm happy to be convinced otherwise.
Top

I don't think I could go back to using a towel/shirt/sheet. A little bit of up front cash makes life easier in the long run - velcro or elastic to keep the cloth over the back if you need to step out, not having it fall off when you're under, full darkness etc. Just my opinion though...
Top

As a rule I use a lightweight focussing cloth which had belonged to a mate I used to work with. He died about 10 years ago and so it does double duty as a memento. It is black cloth on one side and red on the other so that there is a visibility factor when working where there are people.

I also have two huge weighted black and whit 'horseblanket' cloths but they are hot and heavy so seldom get used for their true purpose. The older, tattier one, covers the gear in the back of my van to keep it from view.

I also have the binocular viewer for the Sinar and a reflex finder for the Sinar. The bino-viewer lets you work a whole lot more aware of your surrounding when you are in busy public spaces. (As an architectural photographer I often shoot in busy spaces. The reflex thing is good for low- or high-angle shots and for shooting in plan mode for copying, for instance. Many shooters unfamiliar with ground-glass viewing often use the reflex because it provides a right-side-up view.

But for me, nothing beats actually immersing myself into the image on the screen with a 6x loupe under the black and red cloth.

Thanks for the feedback. In the light of your comments, I think I will start shopping around for a "proper" focus cloth, it sounds like they're a nice thing to have.

The Sinar binocular viewer would be interesting, but my Sinar kit is already getting too big and heavy

I've got both the 5x7 and the 11x14 Black Jacket dark cloths. Rate them highly. Good design that keeps the inside dark, even with your hand(s) inside
Top

I've got the 4x5 and 8x10 black jackets. They're very good although the focusing screen on my 8x10 is usually so bright I can get away with just a jacket lopped over it.
Large Format Photography Australia | My flickr
Top

I just use blockout curtain material, from Spotlight, but bit of a pain when the wind is blowing
Cheers

smbooth wrote:I just use blockout curtain material, from Spotlight, but bit of a pain when the wind is blowing

Actually, I was going to put up a post asking where to find such material to cover my bathroom door for my pop-up darkroom. Now I know, thanks Shane!
Large Format Photography Australia | My flickr
Top

I think that this is the stuff. I'm going to try it for some bellows. Not sure how it will last in the corners; however, I can't find anything better locally. 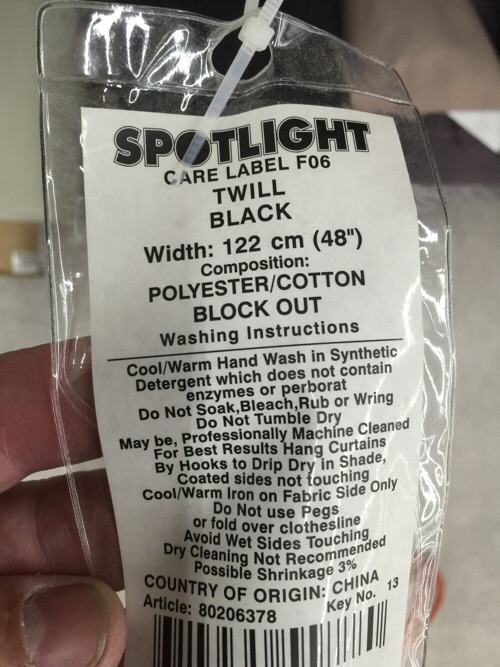