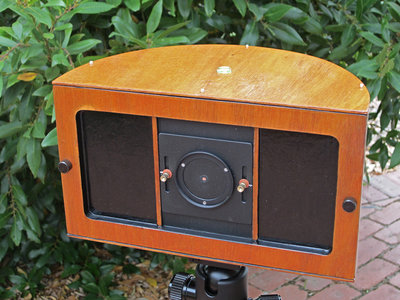 I received a box of Kodak dental panorama x-ray film from a forum member in exchange for some bits and pieces (thanks Shane) and immediately saw a use for it. The resulting camera took months of trial and error to get to this stage, and it still needs work. The film plane curve has a 5" (127mm) radius and I intended the film-pinhole distance to be the same but it ended up 135mm. The 0.5mm pinhole is on a movable plate to allow rise and fall of +/- 15mm to prevent curved horizon lines if the camera were pointed up or down. The good news is that the box is light-tight. But my big surprise on developing the test sheet was that the pinhole is too close: I see an image circle which I have never seen before on a pinhole camera. The IC measures 270mm and drawing it all out on paper shows me that for the 128 degrees of coverage, I have to move the pinhole away from the film another 6mm to cover the full 12" of film. Hence the work that still needs to be done.

This was my first ever experience of x-ray film. Prior to testing the camera I cut a sheet of the film into 4x5s to test film speed and development. I found that a good speed was asa 100, and developing time of 8 min. in PMK Pyro is just right. I was pleasantly surprised with the results of the film, Kodak dental panorama film 198 7627. It's double-sided and oh, does it scratch. I don't have large enough trays for film of this size and used the cat litter trays I use for paper, which unfortunately have a small protruding dimple in the base - a no-no. No more 5x12 negs until I get some proper trays. All in all I'm very satisfied with this project so far. The neg was over exposed so I need to re-evaluate exposure based on an aperture of f/270, and perhaps even change to a 0.4mm pinhole in order to improve sharpness. Here is a cropped image, lightly worked in LR. 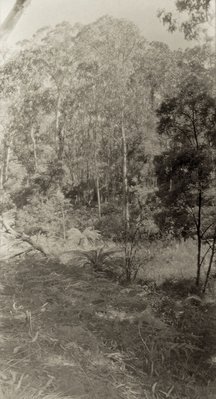 Hey that is great to see, sure there is not something blocking the light path giving that vignetting. It looks quite defined, possibly the filter ring??
The camera is much nicer than my GHD (hair straightener) box.
If you want more film let me know.
As for scratching the film try getting some dacron mat from spotlight, it synthetic and does not soak up anything but it oh so soft to lay on the bottom of the trays
Cheers

Hi Shane. Yes you're right, the rear of the plate I mounted the pinhole on is the likely culprit. Someone on LFPF suggested that. I'd beveled the rear of the hole, but there was still a distinct ridge. I've since ground a bit off the plate and will see how it goes. I'm getting a sheet of glass on Monday when I go to town, and that will get me out of trouble in the short term, but the dacron is worth keeping in mind (not going near a Spotlight store for at least a week).

That x-ray film really surprised me. First time I've used x-ray, and I was impressed by how forgiving it is. For a start I overexposed it and will have to re-check my calcs on the pinhole speed. But overall it responded well tonally. Test shots I did initially to determine film speed and development showed that it held both shadow and highlight detail and was not at all contrasty. It developed well in PMK pyro (I don't have any Rodinal) and overall I found it very easy to use. I'd certainly be interested in more of the same, as I'd use it both for this camera, and cut down to 5x7 and 4x5.

Many thanks for throwing in this film, it's opened a new avenue of interest and enjoyment for me.

Barry its been a while, but I was wondering if you were still playing with xray film?
Top

I'm still using x-ray film. Only the one type so far, the 5x12 Kodak dental panorama film that Shane Booth kindly gave me. It's very worthwhile stuff to use. Mine expired in 2009 and as far as I know was never frozen. It's green sensitive and I've found it very forgiving, which surprised me, given what I've seen of others' results and stories of x-ray film in general. I rate this stuff at ISO 100 and develop it in PMK 1+2+100 for 8 mins. It handles shadow detail well and doesn't seem too ready to block up highlights. I'm wondering if as it's aged its response has flattened out, i.e. the curve has dropped down from the typical high contrast of x-ray film to one more like the lovely HP5+. Whatever the reason, I'm enjoying it. I've even cut some down to 4x5. The downside is that it's VERY susceptible to scratching. I develop it on glass in trays, and that has been a big help, but loading and cutting has to be done very carefully.

Out of curiosity, what film do you use, Andrew, and where do you get it?

Hi again Baz, I use lots of xray in different sizes. Half speed blue in 8x10 and 10x12, green in 8x10, 10x12, 11x14 and 13x16.
I normally get my supply from Chicago Medical Supplies, they normally have film listed on ebay. The 13x16 I got here in Australia and can give you the details, quite helpfull but odd sizes if I remember. The 8x10 green cuts up nicely giving me four sheets of 4x5 for my Shen Hao.
I rate the blue at about iso 100 and the green at 80. Should be iso 100 as you stated but I find I can get more shadow detail and then scan it on my Epson and put the black back in giving me that shadow detail we all crave.
Yes it is finicky, but the last three lots I have processed I had no scratches. I load the old graphmatic six sheet loaders normally and rotary develop, using Ro9 1:180 or 2m in 375ml water for twelve minutes. I find it very forgiving and very good for long exposures. I have gone up to 40 min exposures with it taking in reciprocity factor.
Top

I've changed the filter ring from 49 to 67mm as it was the cause of the vignetting. This camera is wide, covering about 110º and takes a bit of getting used to. This image was destined for Worldwide Pinhole Day 2017 until I noticed the tripod leg in the lower right corner.

Such a shame, its a great pic Barry.
Top

Reminds me of an incident with a bloke I worked with as a kid, Barry.

He had bought a really early version of a Nikon 14 mm lens.Shooting landscape there was a curved vignette right along the bottom edge of the frame, curving up to its zenith in mid-frame.

Techo looked at it and determined it was not discernible as an obstruction in the film gate and certainly was not optical. It turned out that it was his belly intruding into frame. And on one frame the curved vignette even kad a shoe at each end.

Your tripod leg is nowhere near as embarrassing.
Walter Glover

"Photography was not a bastard left by science on the doorstep of art, but a legitimate child of the Western pictorial tradition." —Robert Galassi
Top
Post Reply
9 posts • Page 1 of 1