Last year I picked up a 250mm lens, a Fujinon W f/5.6 250mm to be precise. It was picked up to replace a Linfof Schneider Kreuznach Tele-Arton 250mm f/5.6 lens. There is nothing wrong with the Schneider lens, I just wished to have more coverage, so after looking for close to three years, I found the Fujinon lens I had been looking for.

Rarely do I see a scene that would, or could have the potential of using differing focal lengths to get different results, but the other day we chanced upon such a place when we stopped for lunch and a game of scrabble. We were touring with our slide-on camper on the back of the ute.

Essentially I couldn't make up my mind whether or not to use the 150 or the 250, as I viewed the scene through the camper window as lunch was consumed. I continued to view the scene as we played scrabble until about the time I considered the time was right with regards to the angle of the sun.

In the end I took two sheets, the 150 concentrating more on the overall scene, with the 250 concentrating more on the rock pool part of the scene. In both cases I used a red filter to cut out late summer haze, more so with the 150 than the 250. In both cases the image has had sky cropped out, a fair bit of cropping with the 150. There is nominal cropping at the bottom of the 150 as well. My position was about 20m up overlooking the beach, a perfect place for lunch and scrabble, which I lost, by 1 point.

I'm still divided about which version I like more; thoughts? 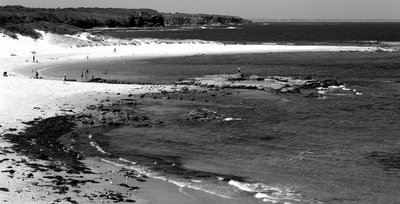 I like them both, Mick, but prefer the 250mm view. My main thought is that the 150 gives a general view of an interesting place, but the 250 has a subject, the symmetry of the inlet and from that we get a feel also for the energy of the place. The closer view also invites thoughts of what's happening under the surface of the water. I don't regard myself as any sort of photographic critic, and anyway, it's all very subjective and different people will react to an image differently. My 2 bob's worth, but I do like the second image very much.
Top

Lachlan, I struggled to get it all in with the 150, using a 180 would have cut off stuff on the right, like with the 250, but wouldn't have gotten in as close as the 250 to give more emphasis to the rock pool; interesting point you raise though.

The 250 for me to, but would like to like the full image. Did you just crop sky or foreground?
Cheers

Shane, the 150 is cropped heavily at the top, and slightly cropped on the right, to more or less bring it in line with the 250 version.

The 150 is cropped at the bottom, the 250 has only had negligible cropping at the bottom to pull out the cliff top bank; I was about 25 metres above the beach.

As you see the 250 version, is now how I believe I'll do a print, which at this stage looks like it will be a landscape with a panoramic look to it, on 300mm x 400mm paper; image will probably be around 250mm deep, width, as and where it falls, but I want all of the width seen here.

I've firmed up on the 250mm lens version as the neg to print.

Ps: picked up some brilliant technical photographic books at the flea market for a song, did you get anything?
Top
Post Reply
6 posts • Page 1 of 1