by andrewch59
After quite a few months saving and a few more in correspondence with Bill Maxwell, he likes a chat, my screen finally arrived. I purchased the HI-LUX Ultra Brilliant Matte with grid, for my Shen Hao 4x5. I did some tests while mounting it on my camera and setup difficult light conditions to test the difference in screens. With the Shen Hao ground glass focussing screen I checked the brightest part of my subject through the ground glass, using a spot meter, and the exposure time was eight seconds at f8, changing to the Maxwell Screen I spotted again and it was down to a one second exposure. Unlike the Graflex Fresnel screen I had been using as a stand in, the concentric rings of the Fresnel screen can still be seen through my 10x loupe, but very faint and does not interfere with focussing. Expensive yes but the tests were done using my Super Angulon 90mm f8, which I had all but retired because focussing was hard in less then perfect lighting conditions. Now I can dust it off and put it in my kit bag.

by Barry Kirsten
That's good to know, Andrew, and thanks. I'd heard Maxwell screens are good, and I might have to bite the bullet myself, having age-related cataracts which have noticeably dulled my vision in the last year. A bugger getting old. I imagine the difference you are seeing is staggering, since the Shen Hao screen is reputed to be not that bright.

by andrewch59
Hi Barry, it was very frustrating, swing focus adjustment was never an alternative, as you could not see out to the edges, so it was a matter of pot luck. I'm off to Tenterfield Monday or Tuesday to take pics of the autumn fall from the maple trees. Hopefully I'll be able to shoot a sea of leaves. The Shen Hao is built like a tank, it only has a couple of downfalls, one of which is the inability to see your subject!

by Walter Glover
Sounds like just the ticket Andrew,

Happy hunting in the realm of the saddler. 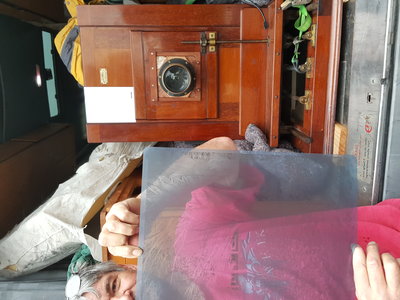 Dunno Why its lying down, but you get the picture, fortunately it was a dull day so Lens cap for exposure worked. Negative turned out fine, wont be a prizewinning shot but it works! Cooke VB LENS 32 inch F16, shot taken at F22 2 secs.
All times are UTC+10:00
Page 1 of 1
Powered by phpBB® Forum Software © phpBB Limited
https://www.phpbb.com/