I have an impending low light photographic foray happening next month, to ensure things would be alright, I undertook some tests.

I will need to use my 65mm wide angle (4x5") lens, the light will be quite low, so reciprocity will come into it and evenness of the subject will be paramount. The subject is a light coloured building, with almost black exterior timbers showing, sort of a wedding dress and dark suit combination; if you know what I mean.

With that in mind I looked around to find something that would within reason, emulate the subject. I eventually ended up photographing my wood turning lathe, which is mostly black, with a light coloured wall in the background.

My film was Ilford FP4+, metered time was 2 seconds, corrected time was 2.39 seconds using Ilford's formula. Allowing for the fact I have difficulty in working out ½ second fractions; or what one would call a fudge factor, I decided 3 seconds was probably about right where the real exposure length would be.

All the pertinent information is in the file name. 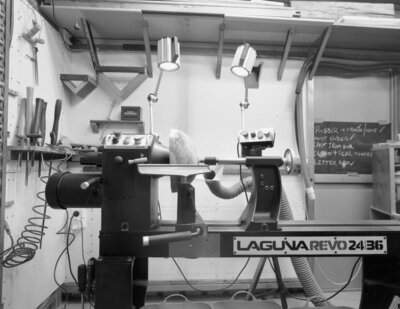 It may well be futile for me to offer critical appraisal of a web rendering, and with the number of unknowns such as whether this is a scan of a neg, my camera copy of a print. That said, looking at the enlarged rendering, I think there are total merges up on the shoulder of the curve. Whether this is down to exposure or development (or printing?) Is hard to tell.

The low values are more difficult to assess due to expenses of featureless enclosures around the motor in the shadows under the lathe bed. Only you know how featureless you want featureless black to be. great to get a glimpse into the workflow, thanks for sharing.
Walter Glover

Mick, I reckon photographing a low light scene using film that is well into reciprocity failure is not easy.

I've never completely succeeded in transforming a dim scene into what looks like a fully lit scene. The problem is that the areas of the film that see dark parts of the subject experience reciprocity failure but the areas of the film that see highlights don't. The result of increasing exposure to bring the shadows up means that the highlights get much more exposure than they need: a significant increase in contrast.

This is where I get tricked up. The increased contrast can be compensated by reducing development but this may lower the effective film speed. Which in turn calls for an increase in exposure and then another reduction in development to beat the contrast build up. Which in turn ......

Please do show the final picture and how you did it. I could learn something.
Top

Walter, this is a low resolution version of a high resolution negative scan. Your hesitation in offering useful critique is certainly warranted. You are correct in that there are issues in sections of the shoulder of the curve, the question is whether or not this will be alright for the family owners of the building.

Maris, I am in complete agreement about the problems with regard to lighting not looking right when you are photographing a dimly lit subject. As for changing development to help reduce contrast, yep, actively working on that right now. I have three sheets with the same exposure as this one, but I've changed the development in a bid to find the correct fine line between what works best and what doesn't.

The shoot will happen over one of three days around the summer solstice right at sunset when the sun lights up the southern side of a 120 year old building. The sunlight is coming through two small hills south west from the main building and was originally called Federation light. The building was finished just in time for celebrations in 1901 for Federation with the first party held on the 1900 summer solstice in the gardens where the light shone briefly on the south facing side.

I have been to the sight a few times over the last few decades, family friends, so this year we are giving it a go. The end result, if it works, will be a print job, possibly a duotone done by a local retired printer with an old Heidelberg single colour press in his garage. The negative will be scanned and I'm sure the detail they will be able to get from highlights and shadows, will certainly be much better than what I would even hope to get either electronically or via a wet print under my own steam.

In case you are not aware, this is the Ilford chart I've been using, it certainly seems to work and work well.

One thing I have surmised a little about the Ilford chart, is whether or not the reciprocity factor Ilford give for SFX film, which is the yellow layer of C41 film, would also work for standard C41 three layer film.
Top

I consulted Phil Davis and this is this chart for changing the gradient. Processing FP4+ is curve #1. I don't have the Ilford data sheets to hand but I'm sure you can access one and find out what the regular gradient is as a starting point.

I don't have any advice here, Mick, but wanted to say that it sounds a fun and worthwhile project.... the one moment of the year that sun hits the south facing wall of a building! Very cool, and it should be celebrated!
Top

Very handy thing to keep, John, is the database locations or objects and the best time or season to shoot them. I wanted to shoot the house that my father grew up in and found had to be right around the summer solstice. As it turned out the first day of sunlight happened be Boxing Day.
Walter Glover

Mick,
Another solution to this, no pun intended, used to be to use Diafine developer — two-bath developer that gives a speed increase and develops to finality, of sort of, that has a very compensating affect. I used it for many years and loved it. Extremely minimal education ..... three minutes in the bath A, three minutes in Bath B, rinse in water,fix, then final wash, irrespective of emulsion. I always found that Freestyle in California were prepared to bend the rules and post it.
Walter Glover

John,
I have a list of places, buildings and so on of what I would like to photograph and the rough time of the year or day when it should be pretty good to do so. It certainly helps to give oneself an incentive to get out there and expose some film. Mind you, I miss many of the times and places mainly because I'm somewhere else or needed elsewhere when the photographic light is supposedly at its best.

Walter, funny you should mention your possible solution, pun intended. I've been wondering about using divided D76, which I have used before and thought of mixing up enough to do a few developing tanks worth, at least of the B solution, that is. If I did use divided D76, I would use HP5+ as I know it works well for the intended subject and divided D76 developer from past experience.

Today is a miserable day with continuous rain and the lighting is as flat as anything, so I'm off to have an experimental shoot with Bergger panchro 400 and HP5+; we'll see. Heading out now with my big brolly.

It would seem it might be raining all. the way to Sydney, Mick,,

Mind you, I curse my self for not persevering more frequenttly in inclement weather.

When I returned from my first trip shooting in England a mate asked what I thought of it and my answer was that it was great ttot have weather that you could actually see.

I believe that Diafine and divided D-76 are pretty similar, A hero,a hero, David Vestal used i with Tri-X most of his life. HP5 + should be pretty interesting, I found it to have more gentle peel and shoulder to its curve that was sensational for contact printing 10x8s. have you considered 'almost stand' development in Rodinal 1+100?
Walter Glover

"We see things not as they are. We see them as we are."
— Emanuel Kant
Top
Post Reply
11 posts