Okay - I'll start with the background.

Two things have led to me building an 8x10 camera.

First, several years ago, a friend on my folks gave me an old dinning table. She had been married for 45+ years, and given the table was a wedding present, it was, therefore, 45+ years old. This is important as it is solid Blackwood. 45 years ago, Blackwood was forest-felled, not plantation. Put simply, the timber is magnificent.

The second thing was one of my dogs needed a hip replacement. So, I have 6 weeks of home detention while she recovers.

The project so far:

I am basing the design partly on a Deardorff, partly on a Chamonix, partly on an Ebony and partly guesswork. The bellows are Sinar, as I CBF building my own. Knobs are being supplied from a supplier (don't have the time to teach myself how to use a lathe).

I have finished the front standard. They are based on the Deardorff design (swing).

The base is loosely based on a Chamonix, in that it is going to be partial carbon fibre. However, the CF will be inlaid, rather than the whole base.

The rear standard is loosely based on the Ebony, with the single knob/dual lock principle. I wanted rear rise/fall.

So, the progress. As I mentioned, I have finished the front standard. This is in nickel coated brass, which, while nice, is just too difficult (and expensive) to use for the rest. It will be supplemented with 5mm aluminium, once I learn how to anodise it.

Yesterday, I commenced a mock-up/proof of concept on the rear frame, using pine. (See below). 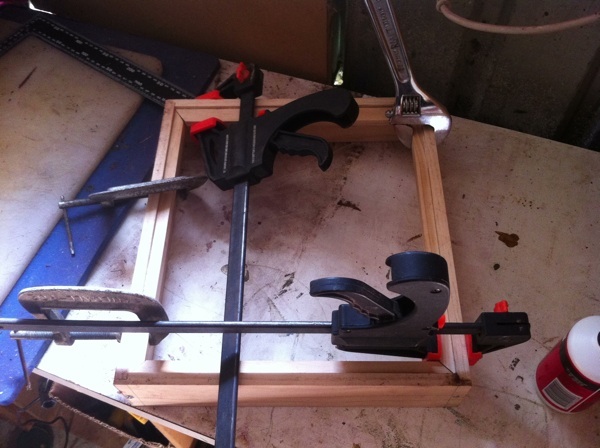 Exciting, Lachlan! I shall be keeping an eye on this thread to see how your camera progresses!
Large Format Photography Australia | My flickr
Top

Good luck with the 8x10!
I hand built my second 8x10 camera but it was from a Bender kit of bits and pieces. I remember never having enough gluing clamps and drilling every screwhole three times (taper, shank, and head) . The biggest challenge was getting every corner exactly square and every frame an exact unwarped plane. In the end I clamped a carpenters square onto every corner while the glue dried while clamping the standards themselves onto a sheet of thick glass to avoid subtle twists. Building the back around a film holder worked better than going by measure and cut.

The part I never really perfected were the back springs. My springy wire compromise was a bit weak and some light leaks happened until I applied some back-up clamps. Looked ugly...worked!
Top

Nice to see it started, good idea to build it in pine first just so sort out the bug. I'll stick to pinhole cameras I think.
Cheers

Maris wrote:Good luck with the 8x10!
The part I never really perfected were the back springs. My springy wire compromise was a bit weak and some light leaks happened until I applied some back-up clamps. Looked ugly...worked!

Believe it or not, windscreen wiper arms work a treat!
Top

Well Lachlan your a real man now.
All you need is a beard and a mule.

Andrew Nichols wrote:Well Lachlan your a real man now.
All you need is a beard and a mule.

Got a new Jigsaw yesterday, so I should be right to start the rear standard's metal soon. Still trying to decide on brass v aluminium.

Also, I'm working on a jig for doing the fingerjoints accurately.

Some of the knobs have been sourced, so I now need to work on drilling out the bolts. This is based on having a dual function, single knob design for rise/fall and tilt.

Gears will have to wait until the new year, while I hope to buy a thickesser this week to size the Blackwood.

So, things are progressing, albeit slowly.
Top

Just get the stuff done at a timber yard some where.
They have million dollar machines that beat the pants off tiny ones.
And if it's just a few bits it's easy.
But then again they are bloody handy tool.
Getting you cuts strait is paramount.

You could spend 5k on stuff some one else could do for you.

Do you know an old timer with a shed of tools.

If I had milled my lens board up properly instead of a rush job from crap composite board it would be still fine.

But if you have space and spare Luka
Then go for it.
It will serve you well for next 100 years.

Go brass. It's got class.

Al and wood no good.
Top

Christmas got in the way, but now I'm back to building.

Still perfecting finger joints. Here's today's practice piece. I'm almost ready to do one for real. (I've moved on from pine to Tassie Oak in the practice set. Loving the hardwoods!) Might try one more with a ripping blade (rather than a cross cut) to see if it gives better finish. Most of this is new to me…

BTW, the timber that this is resting on is the Blackwood that'll be used in the final camera. 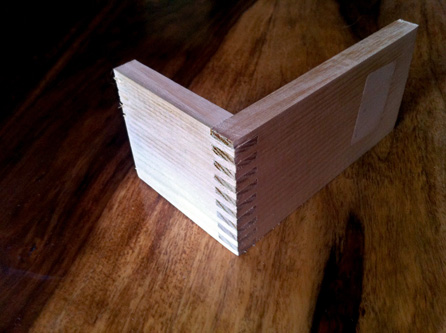 Joints are looking nice, what are you using as a jig to index the cut.
Cheers