Making your print in the darkroom
Post Reply
13 posts

I have over 25+ years involvement in photography shot well over 50,000 images digitally and Film based.
I held the Mono trophy at my camera club for years,until I saw the repetitive methods of the SAPF which only
serve to perpetuate laws rules and not a whole lot of creativity. Our club the Noarlunga camera club had some incredible
mentors on was "OTTO Muller' I was invited to his home and I saw his studio,a german make enlarger that would sink the Bismarck
that afternoon had me set up my own studio and darkroom. I am dismayed at the former LF groups images that have scan of neg and minor touch up
as explanation of the peerless x-ray scans which after 3-400 8x10 I can tell you that is not real, the lemmings follow this trend but the moment someone want to buy a print I bet it won't be a wet print

I have decided to go in the opposite direction I recently picked up a Kennett Dry Mount Press (Ebay $25) very small but easily does an 8x10 on a 14x11 matt I have watched tutorial after tutorial and managed to do 4 successfully so every pursuit has 10% incremental improvements but I think after many 100s of resin and fibre mounting with tape on the back of the window, dry mounting is at least 30% in my opinion.
Here is my wall around our fireplace the silver framed shots on the RH Side are all drymounted and all I can say is wow but I am biased.

Dry mount now that is flat and sharp

Thanks for sharing that story and photos.

Dry-mounting is one of those things I keep meaning to get around to. I'm not a fan of scanning & editing (I only do that for C41), wet printing is infinitely more satisfying. From what you say, I should dig out my dry-mount press and give that a try.
Top

That would please me greatly,as we are not losing this fine part of photography.
Bazz8
Top

Bazz8 is 100% right. The making of physical photographs generated out of light-sensitive materials on a stable paper base is both the ancient origin and enduring core of our art. This, in a world where nearly all pictures, if you cared to count them, are screen-lookers of one kind or another.
In homage to Bazz8's ideal I offer: 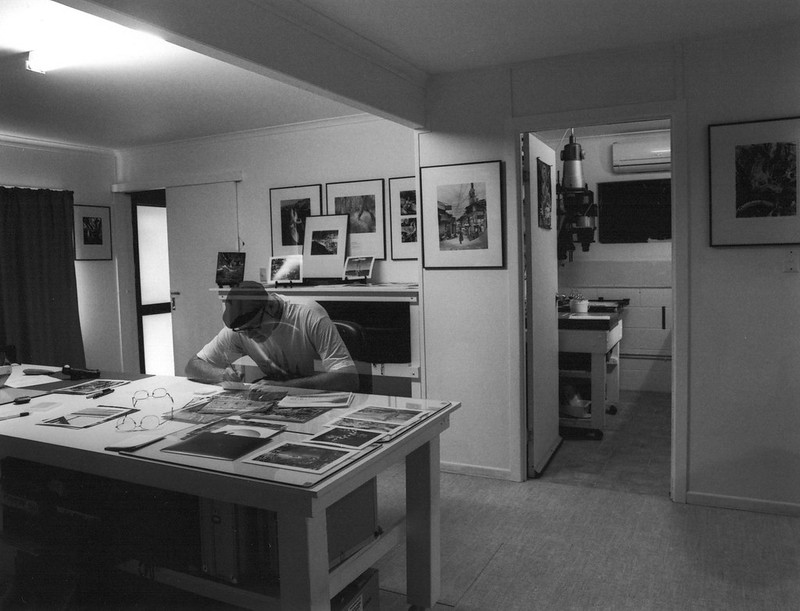 Gelatin-silver photograph on Ultrafine Silver Eagle VC FB photographic paper, image size 16.4cm X 21.3cm, from a Kodak Tmax 400 negative exposed in a Mamiya RB67 single lens reflex camera fitted with a 50mm f4.5 wide-angle lens.
The photograph was made as the concluding piece in an exhibition that ran at Foto Frenzy in Brisbane, Australia.
I am actually spotting photographs the old fashioned way with a 000 brush and Spotone dye. The semi-transparent effect arises because I made a time exposure with the RB67 and had to get up and walk to the camera to open and close the shutter.
Top

Thank you Maris, love the scene you have presented. To many what's the big deal, but those prints will be around long after we
Drop of the perch.
Let's leave the standard as high as we can achieve, 'he who aims at nothing is sure to hit it

How does that process work Lachlan?
Top

Have a look here.

I don’t want to begin a pissing contest. However, new processes do come along that challenge the status quo. This has occurred since Fox-Talbot had his epiphany.

To believe that we have reached the zenith of the pursuit smarts of hubris. As, too, does dismissing all but your preferred method.

I have been moved by symphonic music, but
I also love what David Gilmour does with a black Strat.
Top

Wow, that Chromaluxe stuff is a spectacular evolutionary product in the long history of organising ingredients, piece by piece, into an arrangement that looks like a picture. It is a deep tradition that nearly all the great pictures that decorate and exalt the cultural history of the world are made by this process of assemblage. This includes cave paintings, drawings, mosaics, frescoes, oil on canvas, inkjet, and now Chromaluxe.

But there are a few alternative ways of making images that do not involve assemblage. These include wax impressions, life casts, death masks, brass rubbings, and footprints to name some. The key concept here is that the subject matter physically and directly interacts with the imaging medium. I would suggest that embedding an optical image into a light sensitive surface and gazing at the pattern of marks that result is an example of picture making by impression, physical and direct, rather than assemblage. This is what I do and want to do. Who would insist that this isn't photography?

There is no hierarchy of picture making processes, no method is superior or inferior, no artist triumphs over another solely by the medium they choose to work in. Nevertheless different media have different powers.

The photographs I make, by virtue of the way I make them, have an authority to describe subject matter that comes not from resemblance but from direct causation. Painting, drawing, and Chromaluxe, with all their virtues, do not offer this and are of no service to me in particular. I'd concede this preference, perhaps fetish, is very much a minority view in modern picture making.
Top
Post Reply
13 posts

Return to “The Print”