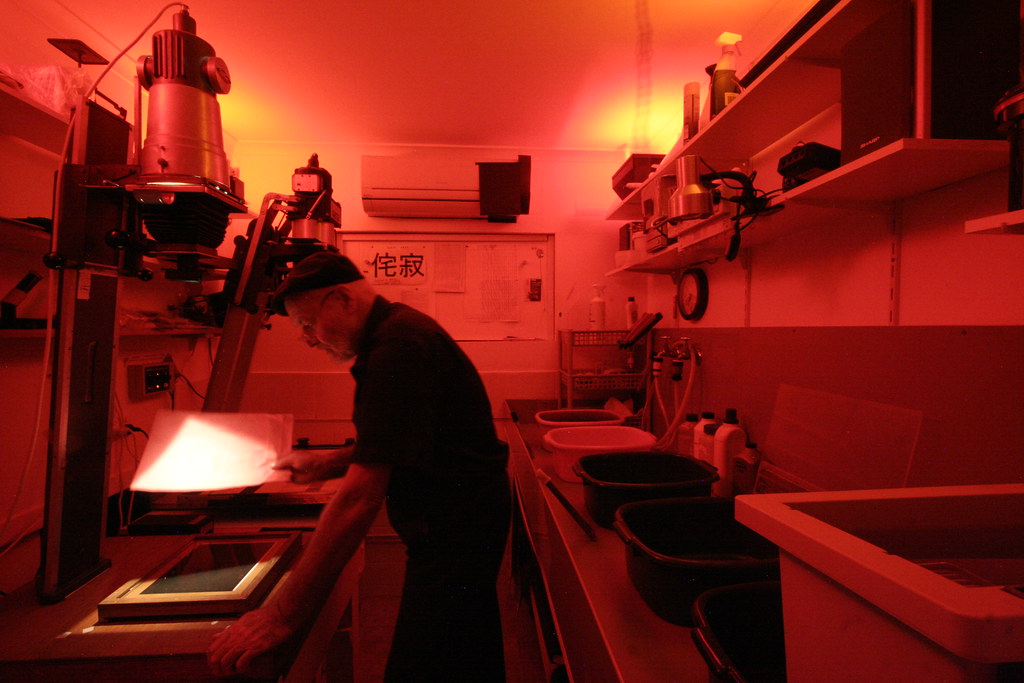 Digital picture showing a negative being exposed in contact with gelatin-silver photographic paper in a divided-back contact frame. An enlarger is being used as a light source and the bright card above the contact frame is being employed to "burn in" part of the image.
The Japanese characters on the far wall translate as Wabi Sabi: "Nothing is perfect. Nothing is finished. Nothing lasts forever." Those are fine concepts to retain while pursuing the art of photography.

by Walter Glover
So happy to see you back on the forum and in action under the ruby glow.

by smbooth
Is that a Gilkron Enlarger I see in the foreground..
Nice digs.

Yep, that's a Gilkon enlarger made by Wilson & Gilkes in Sydney. The format is officially 4x5 but it only just gets there because the condensers are as small (and cheap) as they could get away with. I don't do much enlarging with it but it's a handy light source because I run a 150 watt lamp in it. If the lamphouse fries or the condensers crack it's not much of a loss because I got it for$0.00. The Omega D2V behind it is much nicer to use for precision work.

by Walter Glover
I spent years using a Gilkon in a commercial studio. It had a lever to aid fast movements up and down the column which made it easy for precise sizing such as 49ems from toe to heel of shoe followed by something else of say, 97ems.

I wonder if ems have gone the way of the DoDo?

by smbooth
It looks a bit newer than the one under my house! But I got it for the same price as your.
All times are UTC+10:00
Page 1 of 1
Powered by phpBB® Forum Software © phpBB Limited
https://www.phpbb.com/