Our trip to Canada is a mere 2 years away and so I am looking for alternatives to xray film, which I have used exclusively, for ease of packing and usage on the trip. I have had 120 rollfilm in my fridge for a few years now and decided to try out colour and black and white versions of both.
Never having use commercial film before it was quite an adventure, two rolls of colour are now on their way to Melbourne for developing, one Fuji Provia and one Kodak Ektar 100.
I purchased a Agfa Rondinax 60 tank with the trip in mind, and the numerous rolls of b&w film I will be returning with. I have been itching to try out this amazing little tank and so yesterday I exposed a roll of Ilford Delta 100 to develop in the tank.
Here is my first commercial film photo, it has not been cleaned or altered in any way (as you can see), the detail compared to xray film is quite surprising and I am well pleased with my little developing tank. 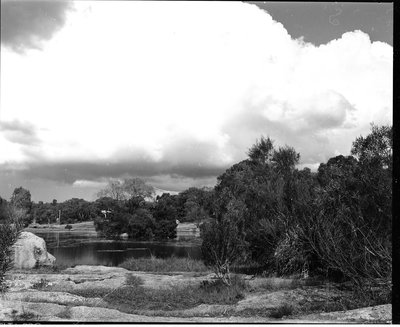 Great to see you preparing with plenty of time up your sleeve, Andrew,

All the best,
Walter Glover

Hi Walter and thankyou for the food for thought. No unfortunately I will not be taking any developing equipment with me. I will be mainly taking preloaded film holders with xray film. Unfortunately xray is so delicate, and double sided, that a change bag would be impossible. I use a sheet of silicone paper slid into the film holder first to avoid scratches, then slip the silicone out prior to closing the holder.
If you watched the short video on you tube about the Rondinax 60 then you would have seen how easy it is to load and develop film, I have Paterson reels, but with my very large hands (I'm 198cm), and a forefinger tip missing, I find it hard to load such a small film onto a spiral and set the ball bearing in motion. I do have a mod 54 insert, which I use regularly for my xray film, but once again with double sided film and no backing to stiffen the film I had to make adjustments to the spiral to keep the film in the holder, like most, I would get tell tale signs of uneven developer flow. I do use it quite successfully loading two sheets only.
As I have mentioned this is my first foray into the world of commercial film, and although the results are dirty and dusty, I am quite surprised at the quality of the film and the amount of detail I am able to get.
The Rondinax holds 150mm of fluid to work efficiently, I would imagine this would submerge half the spiral in soup, but the agitation is continual and in one direction. Yours eyes are perhaps more accustomed than mine as I see no drag, must have a better more critical look.
I use Rodinal, I used the same dilution as I do for xray film, 1:150 or in the case of this particular tank 1ml for twelve minutes.
The biggest problem using my normal xray film is blotching and uneven development, so I have found constant agitation the only way to avoid uneven development. I have tried and still use tray development for larger sheets of xray, but rotary or an old amato tank with individual sheets placed in a stainless steel frame seems to work best. The aim being to continually replace spent developer near the film surface, and a less aggressive soup mix also helps. The film cannot make contact with anything, having emulsion on both sides is double trouble, but was a cheap way to learn.
I have just placed an order for my first supply of commercial sheet film, Ilford FP4+ 125, which I shall try and then secrete away for the trip. I believe I will be able to use a change bag with this, and will have some preloaded in a graflex six sheet holder.
I hope that has answered all of your questions? After re-reading your queries, I will add that the Tank was taken straight out of the box and loaded, I did not clean it, so the heavy dust was probably from years of storage. Yes, I should be flogged! Some dust of course would have been drying, yet to find a cheap humidifier to suit. This was a test strip, its one purpose was to see if the tank work efficiently. I am thrilled to bits with it.
Thank you for your reply Walter
Top

I am most intrigued to learn about the world of your X-ray film. I have had absolutely zero experience with it.

I can envisage how hard it my be loading a Paterson reel with your finger situation. It must be even more of a chore with the Jobo reels — I have a few but have always had the greatest of difficulty loading them. My preferred reels are the stainless steel Kindermann reels.
Walter Glover

Xray film was a very cheap alternative, I have just purchased two boxes of Ilford 4x5 sheets $152 for 50, a box of 8x10 green xray film 100 sheets $68. The 8x10 xray will cut down to 400 sheets of 4x5? not bad Eh?
I was cleaning out my unused developing tank pile, and noticed one to be a little heavier than the rest, on opening I found I had an old Nikkor 4x5 tank that holds 12 sheets at a time. Will be great when it comes time to develop my Ilford sheets. Another amazing piece of engineering.
I think most plastic film bags are xray safe, my intent is to pack everything in one of those, they must work, my film comes from the US and many scans behind it.
I enjoy the xray film because it makes you think at every step, its always a challenge and a cheap way to experiment.
Top

Thanks for the link Andrew, that is certainly a very interesting device. I notice that Alastair had featured it on the Large Format Blog.

I found the company's website but there appears to be no purchasing information. Do you know if they are still available, where from and for how much. Ebay had no suggestions.
Walter Glover

Walter I have seen one that was on fee bay in 2016 and went for $168 US. I was lucky I have bought two complete darkrooms over the past five years one for $50 and one for $100 and it came in one of those packages. Cant help you with purchasing, my best advice would be to contact king at the managers email address supplied on the site, or put a saved search on ebay for both the king and the Nikor tanks.
That will be a godsend being able to develop 12 at a time, will have to put it on the rotary and see how much it leaks.
Will keep an eye open while I'm surfing ebay and gumtree
Top

Electrician's tape is your friend if they are anything like the Nikkor tanks of yore. My Kindermann roll film tank has a great nylon type of top.
Walter Glover