Chatting with Walter recently via PM on the subject of suitable cameras for use in the later years of life, I happened to remark that I used to use a Toyo 810G "...here, there and everywhere." And I did. Walter also used 8x10, in all probability more frequently than I did. Now we both have trouble with 4x5 monorails in the field and are considering options for 4x5 folders.

When Ansel Adams was approaching 80 and someone asked him what camera he used, he replied, "The biggest one I can carry". Perhaps the words he may best be remembered by, since the generation of photographers he most influenced are probably approaching the reality of using LF in later years themselves and saying like me, "right on, Ansel".

The following photograph was done by me in 1987 and has a story to go with it... 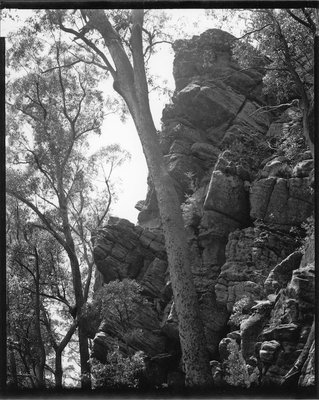 The Three Sisters in Far East Gippsland is a spectacular outcrop of Devonian sandstone north of Cann River, where I was lucky enough to live for several years. I lugged the Toyo up from the car on the track below, through very steep scrub and eventually got to the place I wanted to be. No mean feat, since the camera itself and all its gear was contained in a box I'd made myself, and was supplemented by a heavy Manfrotto tripod. Looking back, I don't know how I did it. (But I was just shy of 44, and that may mean something.) 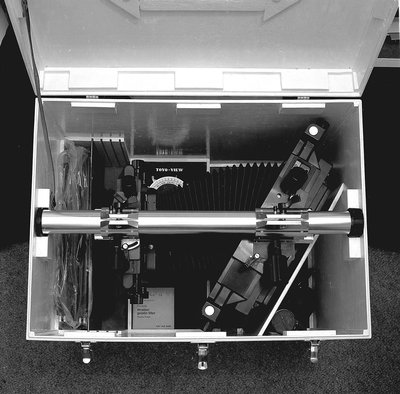 I set up the shot with lots of front rise, forward tilt, back tilt and camera tilted upwards. The 480 Apo-Ronar was at its maximum of image circle. Thought I was set to go when I realised I'd left the spot meter on the back seat of the car! Damn and double-damn! So I trekked back down for the meter and then back up to make the shot.

But I never liked the result, and this is the only print I have of it. The geometry is all wrong because I couldn't get enough rise with that lens. My only other lens was a 10" Commercial Ektar, which I don't think would have been suitable.

Hope this raises a smile.
Top

Fascinating sage of the triumph of the spirit to greet the day for me Barry.

Lotos of bits in the detail that reveal a bond of common experience. But the one lamentable thing you mention which brought a lump to the yet to be fed throat was: Gallery Gr.2 !! That and Oriental Seagiull. What an era.
Walter Glover

And Record Rapid... I loved all those papers.
Top

I've started to consider replacing the Al tubing on my Manfrotto 161 MkII with carbon fibre sections... That thing is a monster to carry, especially with the full 7x17" kit (with the 210mm Super Angulon).
Top

It must be and I don't envy you lugging it all through the bush. I can't remember what model my Manfrotto was, but it was heavy! How easy would it be to replace the metal legs with carbon fibre pieces. And can you find them?
Top

I think it is easy IF I can find equivalent diameter tube.

I've already got some for another project; that's where the idea came from.

And maybe replace the metal plate on the Majestic head for a sheet of CF.
Top
Post Reply
6 posts • Page 1 of 1