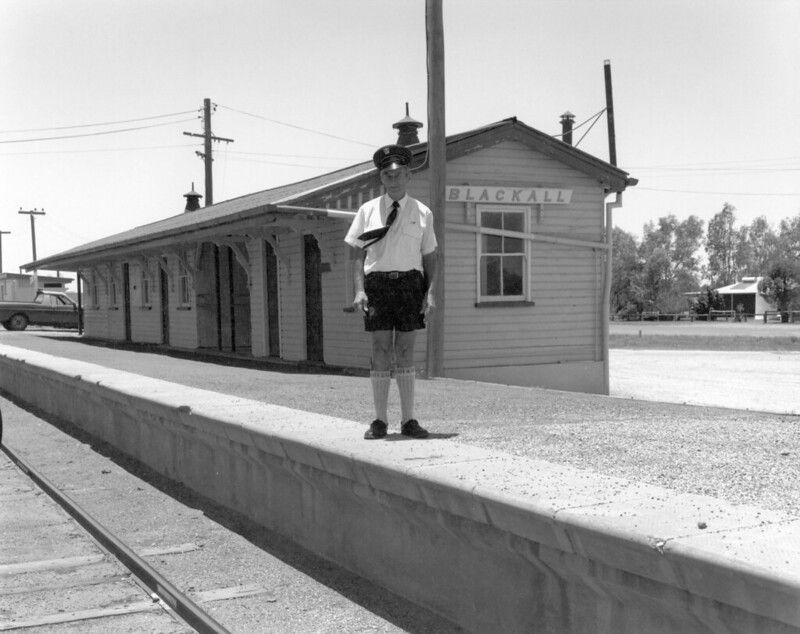 The little black edge-bump two thirds of the way down the left side is the shadow of the number wheel of the Grafmatic film magazine that held this negative.
Top

This brings back some memories. I was stuck in Blackall in 1976 after some heavy rain, north of Blackall the road was dirt, or to be more specific, thick black sticky clay. The only thing moving out there was a woman on a horse heading back to her station about 15km away. We went back to Blackall to take up camp in the town camping ground, which was literally a house block of land with no house but a dunny plonked somewhere on the block. If I remember correctly, we were there for a few days before we risked the road; no warnings back then, you made your own decisions and either got through or got stuck.

This really looks like it was taken in the seventies/eighties going on the shorts and long socks the Stationmaster is wearing. Who says you cannot get a good picture in the middle of the day, I take my hat off to you with this one. Must've been a hot windy day going on his shadow, his tie and of course, the aforementioned shorts.

Enlarged within a whisker of getting the Grafmatic wheel in, yep, done that a few times. I have two Grafmatics, love them, but now I only use them with my hand held converted Polaroid camera. Great units but heavy and they pretty much have the same bulk as two DDS, so for the extra 2 sheets of film, I give mostly them a miss these days when shooting with my wooden 4x5" folder.

Mick, you've got the story pretty right. The Blackall railway station looked the same in 2005, when it closed, as it did in 1908 when it opened. For the last decade it was the terminus for a mixed goods train that carried a few sheep, some mail, and a couple of passengers a month. The QLD government wanted to close the line ages ago but the population resisted vehemently. Why? Because if it rained the only way to go north was on the train. The roads would turn into deep impassable mud sometimes for weeks. Finally the QLD gov built an all-weather sealed road out of the place, the locals were placated, and the Blackall line was closed. The station still exists as a quaint feature after removal to a park nearer town
Top
Post Reply
3 posts • Page 1 of 1