I finished uploading this, then somehow I lost everything, so if this is duplicated on the forum, you'll know why.

These are some steel silos alongside the "Geelong" concrete silos in Patchewollock. We spent a week in Little Desert playing in deep sand, then another week following the Silo Art Trail in Victoria, between lockdowns.

I almost dragged the 90mm out, but by moving a little further away I was able to use the 150 and stay in the lee of the truck away from a gusting side wind. Close thing though as I was running out of rise. 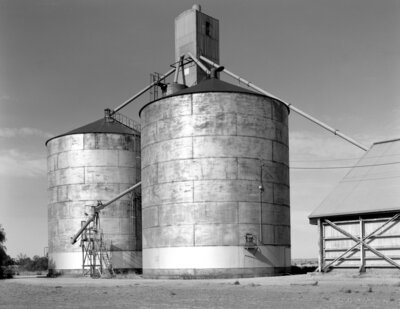 Yet more mastery of Lux Australis and geometric form on the windswept plains that you document! Some years ago I switched to FP4 Plus for the benefit of how its curve drops off into the low lights and these grain producing shots spell that out loud to reinforce that notion.

As a rule I steer clear of saying what I would have done with YOUR handling of the motive but you tempted me by making mention of the 90mm option. Being something of a fanboy of context I'm wondering about the inclusion of more of the rhomboid slanting roof as contrast to the cylinders.
Walter Glover

Walter, your perception of the deficiency in the above image is well warranted and correct. With regard to the rhomboid slanting roof, there is about another metre of clear roof, then from memory, things got busy and I liked the clean lines of what is on the negative

The 90mm would have been better, but necessitating one to move well away from the shelter of the truck. The wind was gusting up around 16-17 metres a second and all things being what they are, the 150mm was the way to go. If I had changed over to the 90mm and put the bag bellows on, I knew I would have been moving closer and still needing some interesting front rise. I wasn't in the mood to be buffeted once again by unrelenting wind gusts.

Now after all of that defensive writing, I can tell you that if we go back there again, I'll have the 90mm on from the get go!

Your reference to the southern light is interesting and has always intrigued me as the light actually comes from the north this far south and is very directional in the cooler months as the sun's arc in the sky lowers. With regard to FP4+, I tend to agree with you, but there is another contender. I have used Bergger pancro 400 for some years now and have found it to be the best film out of the films I currently use. HP5+, FP4+, Foma (in three speeds) and Bergger pancro 400.

It has always performed better in every situation where I've directly compared it against my favourite film, FP4+. Bergger pancro 400 really shines with the ability it has to hold shadow and highlight detail that FP4+ does quite well, but nowhere as good as Bergger pancro 400.

Below, is an example of fantastic shadow and highlight detail in quite harsh lighting with Bergger pancro 400.

During our quite long lockdown in Victoria last year, I did some cleaning up of my film and paper refrigerator. I was pleasantly surprised to find I had 7 x 100 sheet boxes of FP4+ left, not to mention 2 x 50 sheet boxes of Foma 400, 1 box of 50 Bergger pancro 400 and 2 x 100 sheet boxes of HP5+, then there are some miscellaneous boxes of film bringing my total somewhere near 1400 sheets of film. Needless to say, FP4+ is looking good for my immediate future photography.

john, thank you for your favourable comments.

As for film, tread carefully until you have an idea of which way you wish to go.

Ilford FP4+ is pretty much the standard conventional grain structure film, I and many others use in the 4x5" and larger sheet film sizes. There are tabular grain structure films, which are just as good and in some instances better, they do however come at a premium price, mostly.

The cheapest way to purchase English manufactured film that I have found is via Badger Graphics in the USA. They have Ilford films in 100 sheet boxes, these boxes are marginally higher than the 25 sheet boxes one sees almost everywhere. They contain 4 x 25 sheet plastic wrapped film packs in each box. Meaning when you open a box you could extract 1 x 25 sheet bag of film and transfer it to an empty 25 sheet box for ease of handling. I myself leave all of the film in the original box as I go; it is a tight fit but doable.

Bergger is not a cheap film, but I was surprised at the current cost from Gold Street Studios, relatively (for Australia) cheap.

Ilford films in Australia are expensive, quite expensive really.

These are prices I gleaned from sites today and I've converted to AUD.

Freight is on top of these prices. I myself purchased 3 100 sheet boxes of film from Badger Graphics at a time, this was the most economical way to purchase at the time.

I also purchased my Ilford film when the AUD was above parity with the USD, it really makes sense if the USD drops compared to ours to do a quick order; which is how I did it back then. I'm about halfway through what I purchased some years ago.

I've been shopping around for film and find that there are better options (price wise, at least) in Aus. (Sorry if I'm telling you how to suck eggs here, but I post it in case you're in need of film quickly and at a good price!)

Walkens is great, FP4+ at $70 for 25, and same for Decisive Moment. These are very close to the $2.40 plus GST plus shipping from Badger, and might even beat it! I've had devlieries from both of these guys (and ikigai, who dont stock ilford sheet film but have great prices in general) in under 48hrs Melbourne to Canberra.

John, thanks for those links, yep quite good pricing there and I didn't know about them. I've always wanted to learn how to suck eggs.

For what it is worth, I picked up almost all of my USA sourced film at AUD $1.09 per sheet, delivered. The window of opportunity was brief, around 5 weeks, so went a little wild. Even had a query from Jeff at badger as he wondered if my multiple orders in quick succession were real or a scam.