Metrification of biscuits, wouldn't that be an excuse to reduce the actual size of the biscuits and probably at the same time, put the price up?

I don't know about Linhof, but my memory suggested it was Sinar and what I found on the net is this, which looks remarkably like what we had. Not easy to use, although the concept is great, the execution of the metering was very fiddly; but it was accurate. This was in the eighties.

Molten chocolate on a shoot, what a smell that must have been. 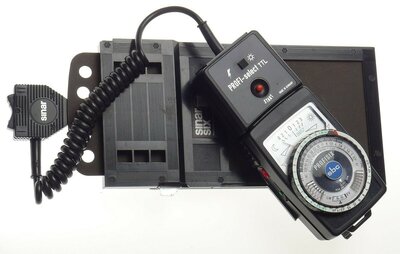 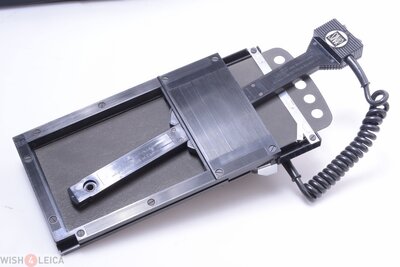 That was the initial Gossen kit. If it was for the Sinor it would’ve been for the Norma and my first encounter with it was seeing it promoted in those glossy Grossbild Teknik magazines that Linhof used to put out.

By the time I bought one in the 80s Sinar had put the probe port into the back standard which negated using that double dark thing and having to black out the viewfinder using the bino-reflex or. magnifier on a bellows with a flap.

Not being rude, I’m assuming that you were around at the time of metrification and decimal currency. The old jingle about 14 February 1966 we copped a double whammy a double because the size of packaging and product had to change for the difference between 8 ounces and 250 g, or 200 g. And of course there was the scale of and of course there was the scale of how many pennies got absorbed when you change from 12p in the shilling to 10 cents. In anticipation for the change things that had been twopence like a packet of chewing gum went up to threepence. Doesn’t sound like a lot but when you multiply by millions it all adds up
Walter Glover

Yep, I remember well Dollar Bill day, it was a Monday and I was ready to receive the 1 cent and 2 cent pieces on that day. I seem to remember the 5 cent and 10 cent coin appeared on the Tuesday.

The real cunning exchanged two pennies for a two cent coin, then get thruppence worth of stuff for tuppence as two cents was the same as thruppence; lasted about a week before retailers caught on.

I well remember the flurry at the lab as word got around that we had a new measuring probe for TTL on the view cameras. I worked in the colour lab which was attached to 14 studios with around 18 or so photographers, so I'm more of a lab rat, but I certainly got to play around with some interesting equipment.

At the time of the introduction (to us) of the Gossen TTL system, I had the Gossen Profi-Six, which I bought in Germany for literally around 30% of the cost in Australia. I also picked up the fibre optic probe attachment for it, which I thought could be useful down the track; which it was and still is. The real funny bit is that for quite some time I used it to check lenses by exposing film at full and half f/stops then read the film directly off the light box with the Prof-Six and fibre optic probe.

I brought my Gossen into work with my fibre optic attachment and we endeavoured to see what the differences were with the Sinar system. On the whole, not much of a difference, but the Sinar system didn't suffer from flare if the studio lights were on and the GG was in a little bit of light. But under the dark cloth, there wasn't that much in it. Fraction of the cost, and, I mean fraction.

I, too, succumbed to te variou add-ons of the Profi-Six.
Walter Glover

I just did some calculations, I've had my Profisix meter for 37 years and still use it whenever I take a picture, pretty impressive as I've been twisting the dial for every measurement; nothing appears loose, although it is a little worn looking.

I have almost the full swag of accessories for it, all acquired bit by bit over decades. When I bought the meter new in Germany, I also bought the darkroom enlarging attachment. Upon getting home I wondered if it was the right thing to do, or a waste of money. I used it mainly for white light density changes by pulling the neg carrier out, measuring the intensity of the white light, before a change of enlarger head position, then after the enlarger head was changed. The accuracy was perfect and combined with a stepless aperture ring on the enlarging lens, meant almost no waste of paper.

I have the 1º 5º and 10º attachment, it really is good, although the whole is a bit unwieldy. Bought secondhand at a flea market for a ridiculously small amount of money.

The flash attachment, earlier of the two versions made, is not that great, never used it much, but it does work.

I have used a borrowed unit but never been able to get one at the right price, the flat copy accessory; one day.

One day, I went out for a photographic excursion in a very small village in Germany. I had no intention of buying anything, not even food, when I stumbled upon a small photographic shop. Looking in the window, I thought the prices must be wrong, or maybe they were the deposit price. My German in those days was considerably small to non existent.

I walked away around an hour later with a brand new Nikon F3 body and the aforementioned Gossen meter and accessory. The F3 body in Australia was around $1,800.00 plus Sales Tax of 32%. I bought my F3 for $640 AUD and upon exiting Germany and the EU, I received the tax back in my hand immediately prior to boarding the aeroplane.

Since then, I have never been able to shake off the idea that the Australian photographic market is grossly overpriced. Whether that is true of not, is irrelevant to my enduring belief that it is true.