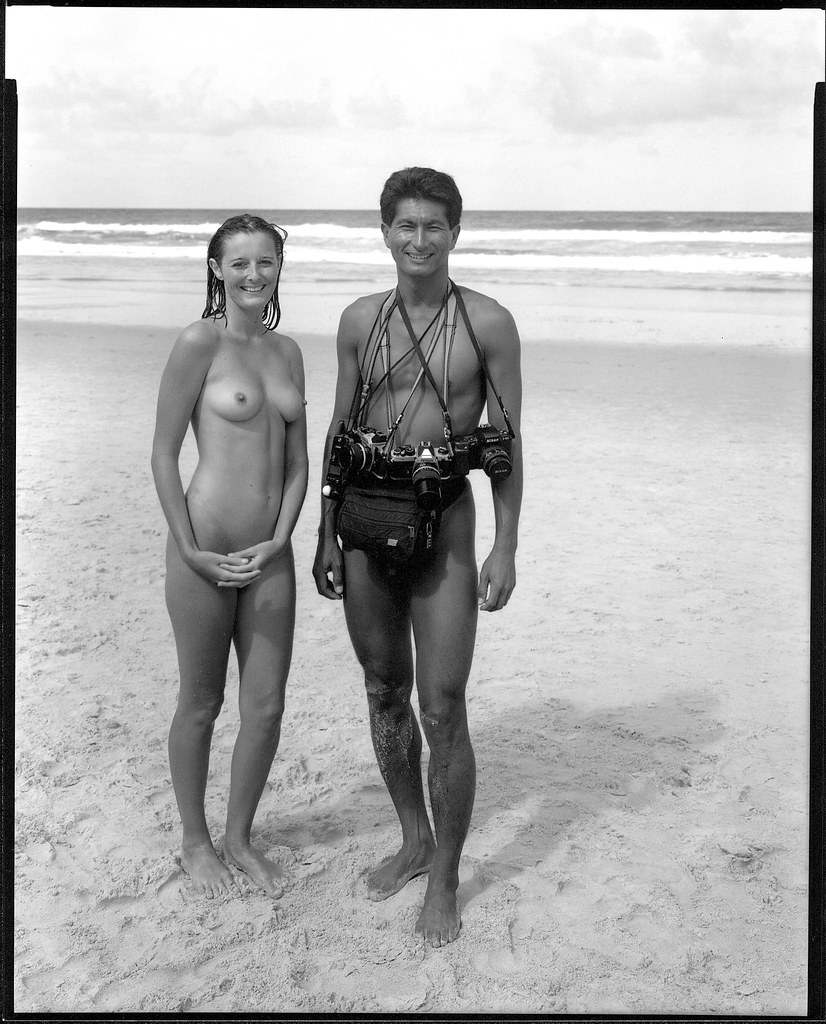 What a coincidence Maris,

Just yesterday I reached down my copy of "Jock Sturges: Radiant Identities"and had a reminiscent flick through. It reminded me, yet again, of just how wonderful skin in natural light looks captured and contact printed with the micro tonality offered only by 8x10. And now this gem, captured not in an alluring French Naturist enclave but in our own Noosa, corroborates my theoty.

Then there's. that incredible drawing of the 300 mm in the real world. Avedon only ever used a 360 mm, according to his long-term assistant, and it had a look .... bu for me the 300 mm is where it lives for both buildings and walkinng around flesh & blood.

Question without notice (and no suresureintent to offend): speaking as somebody who spent a great deal of his life photographing models on beaches with the perils of sand, salt, spray, UV lotion, sweat and baking heat to say nothing of uncluttered working with the model what would be the purpose of having every camera you own at risk haanging around your neck? Was it really like that? Did it haave the model suitably in awe? Or did Maris seize the opportunity to fabricate a wrry statement?
Walter Glover

Alexandria Bay is an unofficial nudist beach in Noosa. Just the area where Bob the photographer and his model could work without attracting particular attention. I walked through the place with a 8x10 camera over my shoulder (as one does) and said hello to them. Would they pose? For the privilege (?) of standing in front of an 8x10 camera: of course, of course.

Why so many cameras? They are 35mm film cameras so black and white and colour have to be catered for. The photographer also said that he didn't want to open a camera for loading and unloading, or for a lens change, on a sandy beach with a bit of breeze across it.
Top

The photographer also said that he didn't want to open a camera for loading and unloading, or for a lens change, on a sandy beach with a bit of breeze across it.

There in lies the reason why I used 15 foot loads of 70 mm EPR in my Hasselblad and 220 in my Pentax 67 and Pentax 645 for years. Minimising the need to open the camera in a hostile environment.

The unforeseen bonus with the 70 mm was that the main consumer of normal base 70 mm Ektachrome was the US military and it was the best emulsion thaaat you ever sset eyes on. NASA used a thinner film base which increased the number of frames of al casette from 70 to 200. Mind you the camera is always on the tripod and over the shoulder and not slapping about on my sweaty skin.

In the shot I am really impressed by the casual unposed nature oof the shot. I've probably said it before,I've a really regret having had to forsake the 8x10 .... but it truly needed a dedicated darkroom which I had at Bondi but not when I moved to Leichhardt in 2005/6.
Walter Glover

The light is perfect, cloudy light.

Great detail in the sand and their different skin tones, which, if the light had more contrast, could have been a bit problematic for you.
Top
Post Reply
5 posts • Page 1 of 1