Something I've been working on all this year, a folding 5x7 with good range of movements. Made of Huon Pine from Tasmania, a beautiful timber prized for boat building (unaffected by water) and fine furniture making. I considered the traditional teak, mahogany, cherry, walnut etc but could see no reason not to use Huon Pine. It's strong and light, the whole camera weighing 2.2kg, exactly the same as my Kowa 6x6 with lens. I did the final assembly of all the bits and pieces yesterday and only have the focusing screen to grind and zero marks to inscribe for the movements. We still have two weeks of stage 4 restrictions here, after which I'll be able to take it out and use it. Looking back I question whether months of work have been worth it. But I make things - I always have, so I don't think I'll ever change. It's not as well finished as a bought one but I'm sure it will work as it should, and I think it looks rather nice.

Movements
Front: 50mm rise/fall, 40mm shift L/R, swing and tilt as per bellows.
Rear: 30 degrees backward tilt, 12 degrees L/R swing.
Extension 530mm, but bellows will only allow 400 (I planned for 450 but fabric stiffness is excessive.) These are the bellows I made in 2017 (see previous post.) 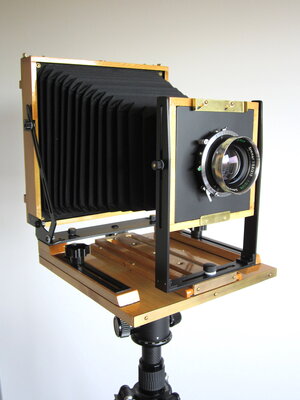 Nicely done Barry,
It looks to be a sinar panel?? How wide ar the bellows? Wide enough to avoid bellows flare, I hope.
Walter Glover

Hi Walter, good to hear from you and hope you're doing well. No it's not a Sinar panel. It turned out to be 118mm square. I was concerned about bellows flare/vignetting and wanted a decent size all round to prevent it, consistent with keeping the overall size of the camera as low as possible. So the bellows turned out about 225mm square tapering down to 118 (frame sizes). The moment of truth will soon come with my first test shots!
Top

As you'd guess, I can well and truly vouch for your design and fabrication skills as witnessed in the Toyo lens panels included in the bundle we traded some years ago.

I wish you every success and mountainous rewards.
Walter Glover