Near Archie Creek, which is behind Kilcunda and very much subject to the edge of the roaring forties circulating the globe.

Taken in December 2020 and my first exposure after the big lockdowns in Victoria. I had wished to take this scene over the last few years, but the wind has always been against me, also the time of the day and year. The wind was so great I had to hold the tripod the entire time with at least one hand, I couldn't use a cable release as it flopped about like a wind sock at an aerodrome, not to mention the difficulty I had trying to get the cable release in position.

This is one of my very few images that is 100% of the film, no cropping. If you look in the top right corner, you can see the single notch for Bergger Pan 400.

It has been a long time between drinks for uploading images, I've suffered a computer failure, and when back in business, the software I had for converting film scans into scalable correctly sized images, would no longer work. This image is the first I've put through the new software (GIMP) and to say I am at the bottom of the learning curve, is a very big understatement. 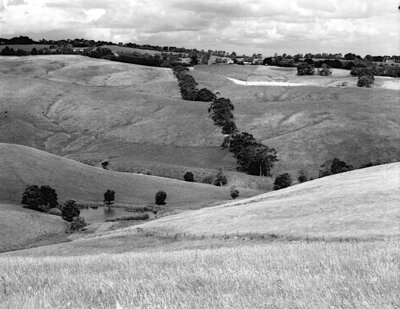 Good one Mick considering nearly everything was against you: top of a hill on a windy day, longer than normal lens with more bellows in the breeze, fast shutter speed and limited stop-down for front to back sharpness, and an orange filter(2 stops?) to slow things down even more.

Hurry up and learn GIMP. There has been a serious shortage of Mick Fagan pictures lately.
Top

Maris, thanks for the encouragement.

One stop extra exposure for the orange filter, I normally use 1½ stops extra with this filter, it's light orange. I have another orange filter (Nikon) which requires 2 stops.

I was really struggling with the wind and in a rare for me thing, I exposed two sheets. The first without the orange filter at 1/125, the second 6 minutes later, with the filter at 1/60.

I'm glad I did use the filter as the negative without the filter is rather bland, as for the quick decision to just change the shutter speed without adjusting the aperture, I knew I could get away with it as I normally expose this film at 320 ASA and figured it would be doable. It was.

Doing some online tutorials of GIMP for what I need, which is basically dust spot control or elimination, cropping, then finally contrast adjustment, it is quite hard as almost everything is geared for colour negative; I'm getting there though.

Mick, I was going to respond to this image the other day, partly in reference to Gimp, but with a mention for Darktable. But since you seemed committed to Gimp I bailed out of the post. Having read what you want to do, I reckon Darktable is probably more suitable for you, and easier to learn. It's a substitute for Adobe Lightroom, and in many ways vastly superior. Like Gimp it's open source, and there are many resources available - in particular Bruce Williams' excellent series of YouTube videos. I got sick of Adobe's monthly subscription and went to Gimp and Darktable as replacements and haven't looked back. Yours is a very nice image made under difficult conditions and I can see why the orange filter was so helpful.
Top

Barry, more encouraging words about my endeavours, thank you very much. We've had a very trying 2 years with my wife's health, then COVID and so on. To be able to finally do some active photography, has been very rewarding.

As for GIMP, I hadn't really heard about it before I looked into software needed to fiddle with my film scans. My exposure to software for film scans is modest at best, I've been using CS3 which, as I understand it, is a reasonably restricted early photo shop bit of software. I learnt what I needed to do and left it at that. Light room, I have heard of it, but never seen it; so I have no idea whether it would be good or bad for myself.

I'll look up dark table; an interesting name. But once I get going with GIMP, I should be fine. Always nice to know what is available though, so many thanks. You are right about one thing, the cost of GIMP, which is nothing, is sort of astounding for what it can do from what I have seen in online tutorials.

Tomorrow I'll have some scanning to do as I developed 5 sheets of FP4+ today, with a couple of those negatives being pretty much what I envisaged; they looked good even when wet over my light box. I wonder if there is any software called light box?

Hehe, I think Adobe Lightroom was supposed to be a sort of digital light box for negative/tranny viewing/organising/slightly modifying and an alternative to Photoshop. I think it became very popular. For me, I hate anything to do with computers in image processing, but like many have come to realise that it's difficult to do without some form of digital interaction these days, even for a rusted-on film photographer. It's the reason I don't post much online - too much of a PITA to be bothered with the digital side. However... I've long been interested in carbon and platinum printing, which require a contact negative to print from, as you probably know. For 5x7 or larger, that's no problem, but for smaller formats an enlarged negative is required, and this is vastly easier IMO via digital negatives. And this is the only thing that really interests me in the involvement of computers in my photography. I've made a rod for my back and I'll just have to put up with it. Of the two, Gimp and Darktable, I am finding the latter more generally useful. But like you, I'm a real novice at this and find the learning curve sttep.
Top
Post Reply
6 posts • Page 1 of 1