I'm new to film and large format, enjoying it very much.

I've had my Horseman rail camera for a few weeks now, and ran a few sheets of colour through this past weekend on the Southern NSW coast.

Here is Camel Rock post sunset on Portra 160 and Horsehead rock pre-sunrise on Ektar 100 (both 4x5). Gear was a Horseman L45, Schneider Symmar S 135mm, benro tripod. Bath towel as dark sheet was a bit of a nightmare in the wind! 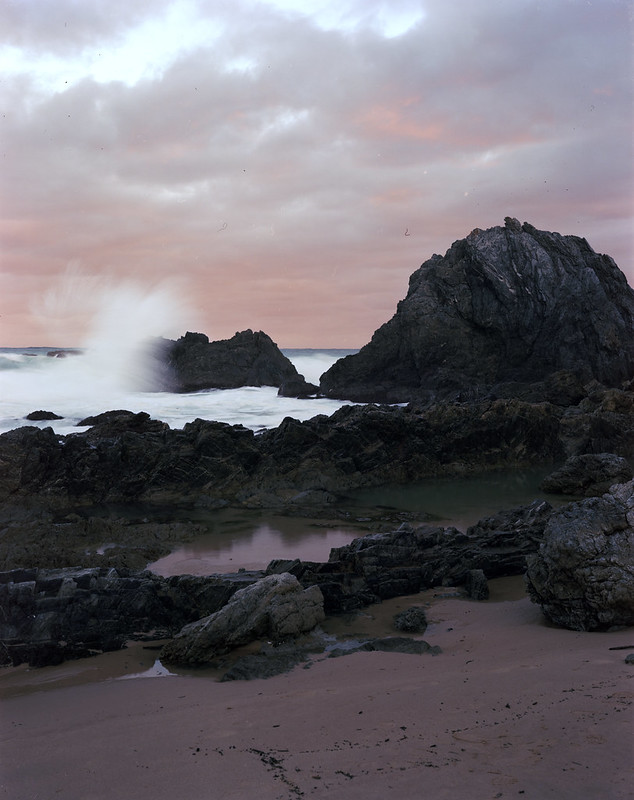 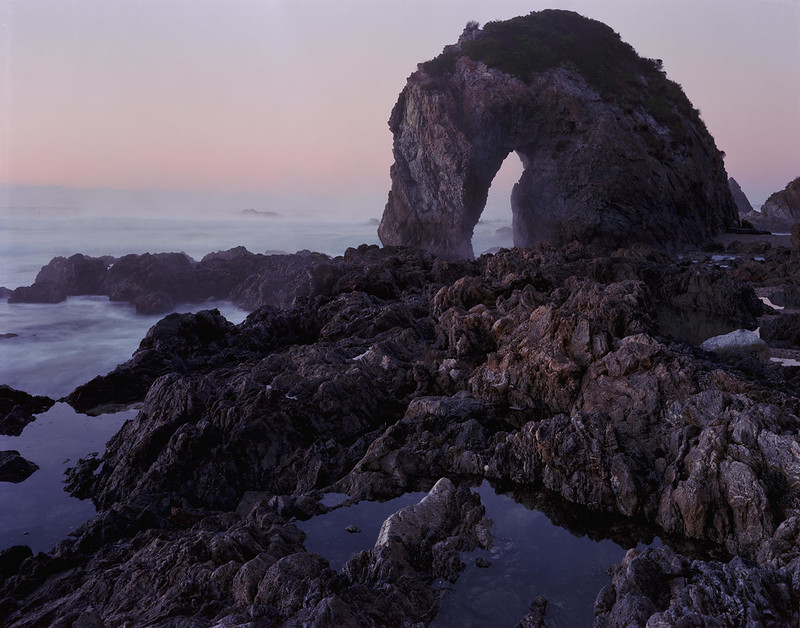 Horse head rock with Ektar by J P, on Flickr

John, welcome to the forum as well as large format.

I only see two black boxes, no images. Have you reduced them in size for web display, or are you using a link? If you are using a link, I don't think it's working.

Same for me, sorry to say. Looking forward to seeing new images from a new member

Mick, Oscar, thanks for your interest! And thanks for letting me know the original effort didnt work... I attached rather than using the BBCode, which seems to have worked well.

I have some other shots that I'll post up too... Keen for feedback from experienced folk!
Top

It is a bold and brave challenge to take on shots like these with sunlit surf foam and silhouetted masses of textured stone. But to do it with the tonal range limitations of colour film is heroic.

Now, I realise that the notion of 'fill-in flash' might be aas abhorrent to you as they are to me, but let me tell you of an occasion that broadened my mind on that. I attended a one-day seminar in Sydney with John Sexton back in the 90s. He had a pic of a round black boulder poised on a rock shelf in rapids. To expose for the white turbulence would render the boulder as a formless black disc. He knew that he had a flash gun in his kit, but the thought that purists would ONLY ever approve of available light.

He thought about it and realised it was right there in the bag at his feet: it was 'AVAILABLE. It proved to be one of his more successful shots, published in books in addition to gallery sales.

I was always similarly opposed to the concept of press photography style 'synchro-sun' and I had decades of working on beaches and often found it handy to have a fflash with me; not to light things up per se, but to simply lift the shadows. In colour I would add an amber gelatin filter to the flash and it lost that obvious blue cast. The professionallighting gels are available from Rosco Australia and are graded: Pale Bastard Amber, Bastard Amber and Dark Bastard Amber so you can match them to the varying warmth of the daylight through the day.

Let me say, i think you nailed it with the sea, sky and clouds.
Walter Glover

John, the horse head is a genuine colour picture, meaning colour makes the image strong, really strong. I think you have succeeded very well with that one.

The camel one though is not quite up to the same standard, the colour is there, it just isn't being reflected from the rock formations, a warming filter may have helped you a bit. I'm not sure whether going through the back door would have helped as well, have you re-scanned through the front door?

Great to see you are doing your own C41 developing, it really is easy, easier than B&W once you have the temperature and tightness of the first developer regime correct.

The fact that you are new to film and large format, then having shown us this, tells me you are going places.

Mick, Walter, thanks a whole heap for the constructive feedback! A long way to go, but having your thoughts on hand will hopefully make my next excursion a step ahead of my last

Oh, and no, I've not rescanned the front of the negative yet Mick. Will do so once I have some fresh stock to put through. Thanks for the suggestion!
Top

I have been addicted to photography since the age of 7 and I'm the bad boy who doesn't shy away from helping you get your fix and stay hooked. I am sure there are many of us here willing to offer a leg up on your journey. Ask away!
Walter Glover